What does Blanche mean?

[ 1 syll. blan-(c)he, bl-an-che ] The baby girl name Blanche is pronounced in English as BLAENCH or in French as BLAON-SH †. Blanche's language of origin is Hungarian, Italian, and Old French, and it is predominantly used in English and French. Old French origin: It is derived from blanc meaning 'white, bright, beautiful' ; blanco 'white' ; blanche 'white' ; bianco 'white'. The name is from words of various Romance languages, and ultimately from the Germanic blanc (meaning 'white, bright, beautiful'). The name was originally given to blondes; a fair complexion and light blonde hair has been the traditional European and aristocratic notion of beauty.

The name has been borne by several members of royalty, such as Blanche of Castile (1188-1252), queen of Louis VIII of France; Blanche of Artois (1248-1302), queen of Henry I; and Duchess Blanche of Lancaster (1345-1369), the heroine of The Book of the Duchess (1369-1372), an elegy written by Chaucer to commemorate her death. The given name was introduced into England by the Normans, but it was not used much in the medieval period. It saw a brief revival at the end of the 19th century, and was later made known by the character Blanche Du Bois in Tennessee Williams' play A Streetcar Named Desire (1949), which was made into a successful film (1951) starring Vivien Leigh as the female lead.

Blanche is a variation (English) of Bela (Czech, English, and Russian).

Blanche has 13 variations that are used in English and foreign languages. English variations include Blancha, Blanchette, and Blanshe. Another English form is the spelling variant Blanch.

Blanche is an unusual baby name for girls. Its usage peaked modestly in 1903 with 0.422% of baby girls being named Blanche. Its ranking then was #59. The baby name has since steeply slipped in popularity, and is currently of only sporadic use. In 2018, among the group of girl names directly related to Blanche, Bianca was the most widely used. The name Blanche has been predominantly given to baby girls, although it has also been used as a boy name in the past century. Baby girls named Blanche outnumbered boys by 61 times in 1908. 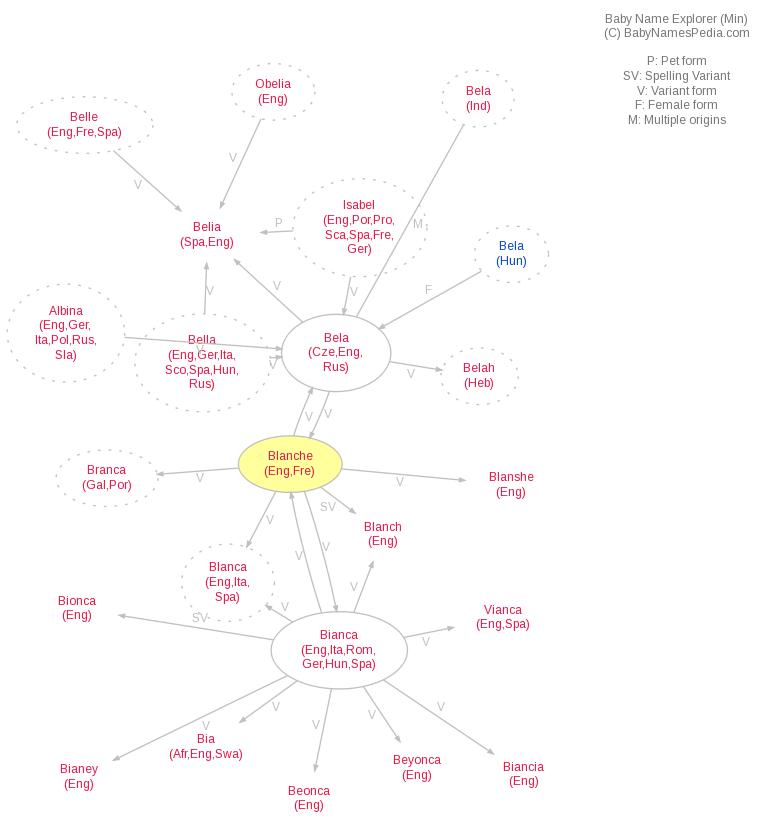