What does Bo mean?

[ 1 syll. bo ] The baby boy name Bo is sometimes used as a girl name. Its pronunciation is B-aw †. Bo is largely used in the English and Scandinavian languages, and it is derived from French, Old Norse, and Germanic origins. Old Norse origin: It is derived from the element 'búa' meaning to live, to dwell, have a household. The first name originated from a nickname for a householder. See Bo for more information.

In addition, Bo is a short form of the name Beau (English).

Bo is also a variant of the name Bogart (English).

Bo is also an English diminutive form of the name William (English and French).

The name Boe and the name Boje (Scandinavian) are variants of Bo.

Bosse (Scandinavian diminutive form) is another variant of Bo.

Bo is fairly popular as a baby name for boys. The name's popularity has been increasing since the 1970s. At the recent height of its usage in 2018, 0.025% of baby boys were given the name Bo. It ranked at #575 then. Within the group of boy names directly linked to Bo, William was the most frequently used in 2018. It was used 30 times more than Bo in that year. Bo has in the past century been mostly given to baby boys. 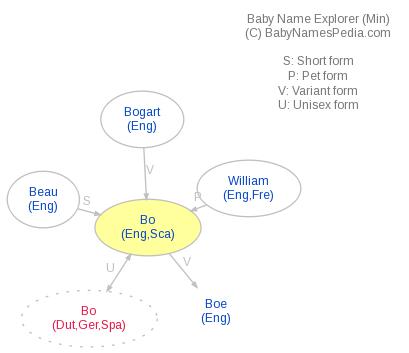