What does Bob mean?

[ 1 syll. bob, bo-b ] The baby boy name Bob is pronounced as BAAB (English) or BAOB (Dutch) †. Bob is primarily used in English and its language of origin is Germanic. The name was first used as a diminutive of Robert among 18th-century English speakers. It was a later development than Dob, Hob, and Nob, which were medieval diminutives of Robert which, unlike Bob, gave rise to English surnames but did not remain in use as given names. In literature, it has appeared as the names of the fictional Bob Acres in Richard Brinsley Sheridan's comedy The Rivals (1775) and Bob Cratchit in Charles Dickens' A Christmas Carol (1843).

Bob is an English shortening of Robert.

Variant forms inherit the origin and meaning of the name Bob.

Bob is rare as a baby boy name. At the peak of its usage in 1934, 0.233% of baby boys were named Bob. It had a ranking of #75 then. The baby name has substantially dropped in popularity since then, and is now used on a very modest scale. In 2018, out of the family of boy names directly related to Bob, Robert was the most regularly used. 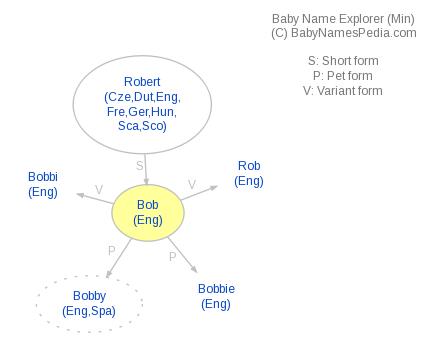