What does Boniface mean?

[ 3 syll. bo-ni-fa-ce, bon-if-ace ] The baby boy name Boniface is pronounced as BAON-ah-FahS or BAON-ah-FeyS in English †. Boniface is used predominantly in English and French. It is derived from Latin origins. The name Boniface means good fate, well-doer, doer of good deeds. The original form was Bonifatius (Latin), from 'bonum' and 'fatum'; by the medieval period, the form Bonifacius (Latin) also appeared, often interpreted with the elements 'bonum' and 'facere'. The name was borne by various early saints and nine popes. Saint Boniface (672-754), the Apostle of the Germans, was a prominent missionary in Germany and Holland. Although the name was popular in the Middle Ages, it dropped off in use after the Reformation due to its lack of mention in the Bible. In literature, the name was later made known by George Farquhar's play The Beaux' Stratagem (1707), and has since been associated with a landlord or innkeeper, influenced by the eponymous character in the play.

Boniface has 11 variations that are used in English and other languages. English variations of Boniface include Bonifaceo, Bonifacios, Bonifacius, and Bonifaco.

Boniface is not commonly used as a baby boy name. It is not listed within the top 1000.

A baby name that sounds like Boniface is the name Bonifác (Czech). 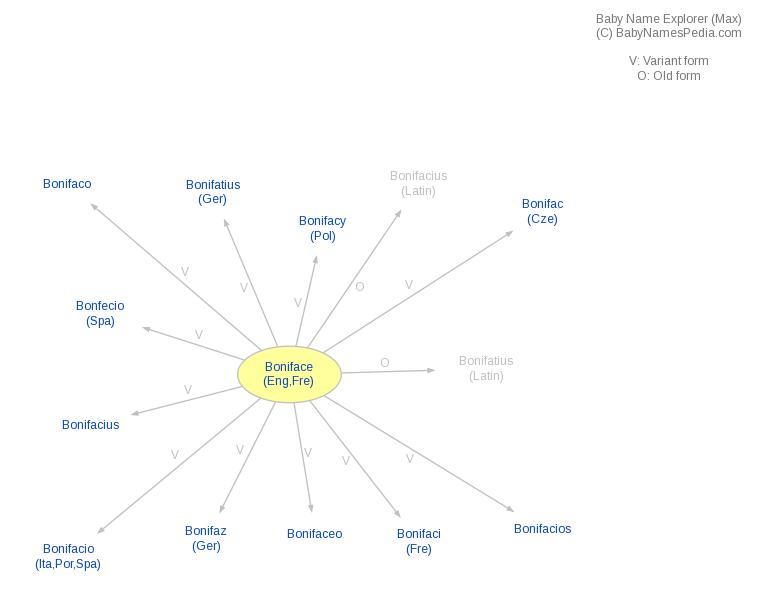