What does Bonita mean?

[ 3 syll. bo-ni-ta, bon-ita ] The baby girl name Bonita is pronounced Baa-NIY-Taa- †. Bonita's language of origin is Spanish and Scottish. It is predominantly used in the English and Spanish languages. Spanish origin: It is derived from bonito meaning 'pretty' ; bon 'good' ; bonum 'good'. The name appears to be the feminine form of the Latin Bonitus, which is from the Latin root bonum and was borne various early saints. Bonita was however, not used as a given name in medieval times. It first appeared in 20th century America, as a feminine form of the Spanish word bonito, itself ultimately of the Latin bonum; the name does not appear to have been originated in Spain itself.

Bonita is a derivative of the English and Scottish Bonnie.

Bonita is a rare baby girl name. At the modest peak of its usage in 1950, 0.087% of baby girls were given the name Bonita. It had a ranking of #182 then. The baby name has suffered a steep decline in popularity since then, and is currently used only on an infrequent scale. In 2018, out of the family of girl names directly linked to Bonita, Bonnie was the most regularly used. 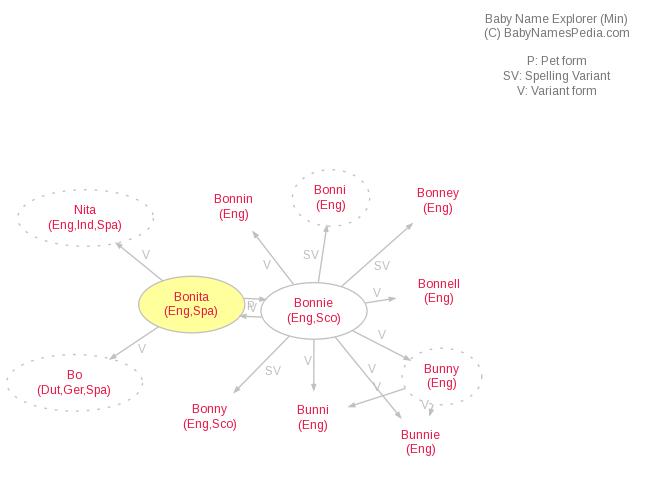