What does Bonnie mean?

[ 2 syll. bon-nie, bo-nn-ie ] The baby girl name Bonnie is pronounced BAAN-iy- †. Bonnie has its origins in the Spanish and Scottish languages. It is used largely in English and Scottish. Scottish origin: The Scottish word bonnie is itself from the Old French bon and ultimately the Latin bonum. The name was given a boost in popularity by its appearance as the nickname of Scarlett O'Hara's baby in Margaret Mitchell's Gone with the Wind (1936); in the novel, her real name is Eugenie Victoria but she has eyes as blue as the 'bonnie blue flag' in reference to the Confederacy. The name was also borne by the infamous bank robber and gangster Bonnie Parker (1910-1934), who together with his partner Clyde Barrow was the subject of the film Bonnie and Clyde (1967).

In addition, Bonnie is a familiar form of Bonita (English and Spanish) in the English language.

The name Bonnie is used to a great extent; it has 26 variants that are used in English and foreign languages. English variants of the name include Bonbon, Bonea, Bonee, Boney, Boni, Bonia, Bonie, Bonne, Bonnea, Bonneah, Bonnee, Bonnell, Bonnia, Bonnibel, Bonnibele, Bonnibell, Bonnibelle, Bonnin, Bunni, Bunnie, and Bunny. Other English forms include the spelling variants Bonney, Bonni, and Bonny (used in Scottish too). Banee (Vietnamese) is a variant of Bonnie that is used in foreign languages.

Variant forms share the origin and thus the meaning of Bonnie.

Bonnie is an all-time favorite. At present it is still rather popular as a baby girl name, but to a lesser degree than it was before, and it is also perceived as fairly trendy. At the peak of its usage in 1942, 0.635% of baby girls were named Bonnie. It was #34 in rank then. The baby name has suffered a substantial drop in popularity since then. In 2018, it ranked at #691 with a usage of 0.023%, somewhat regaining its popularity in the recent decade. Out of all girl names in its family, Bonnie was the most commonly used. The name Bonnie has primarily been a baby girl name, although it has also been given to boys in the last century. In 1953, 139 times as many baby girls than boys were given the name Bonnie. 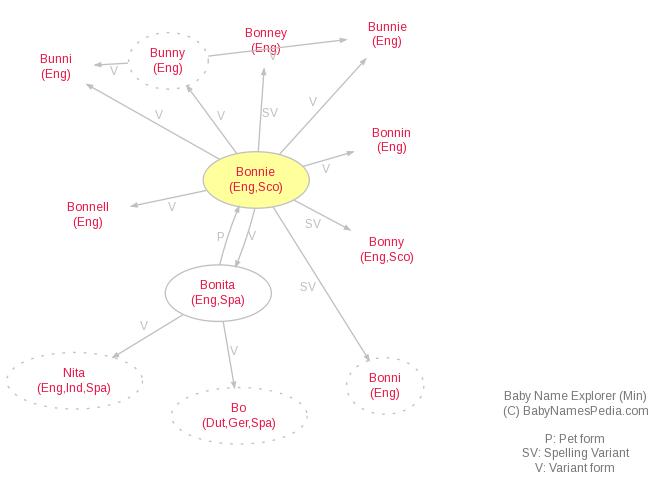