What does Boris mean?

Boris has its origins in the Slavonic language. It is used largely in the English, German, Russian, and Slavic languages. The name is often taken to be from the short form of Borislav and thus of the element boru (meaning 'fight, battle'). It is more likely of Tartar origin, from the nickname Bogoris. The name has been borne by three Bulgarian rulers, including the 9th-century King Boris I, who converted his kingdom to Christianity. Saint Boris was a 10th-century Russian saint and prince who was murdered along with his brother Gleb; their festival is still being observed in Russia. Boris Godunov was a 16th-century Russian tsar and son-in-law of Ivan the Terrible; he became the subject of Alexander Pushkin's play (1831) and Mussorgsky's opera (1872) bearing his name. The name has long been popular in Russia and Hungary. Among English speakers, it has been made known by Boris Karloff (1887-1969), the horror film actor best known for his role as the monster in the film Frankenstein (1931).

Boris's origin is Tartar. Here, it means small. An original form of Boris is Bogoris (Tartar).

Boris is a contraction (German, Russian, and Slavic) of the Russian and Slavic Borislav.

Boris is unusual as a baby name for boys. Its usage peaked modestly in 1923 with 0.004% of baby boys being given the name Boris. Its ranking then was #963. The baby name has since experienced a fall in popularity, and is today used on an infrequent scale. Among all boy names in its group, Boris was nonetheless the most regularly used in 2018. 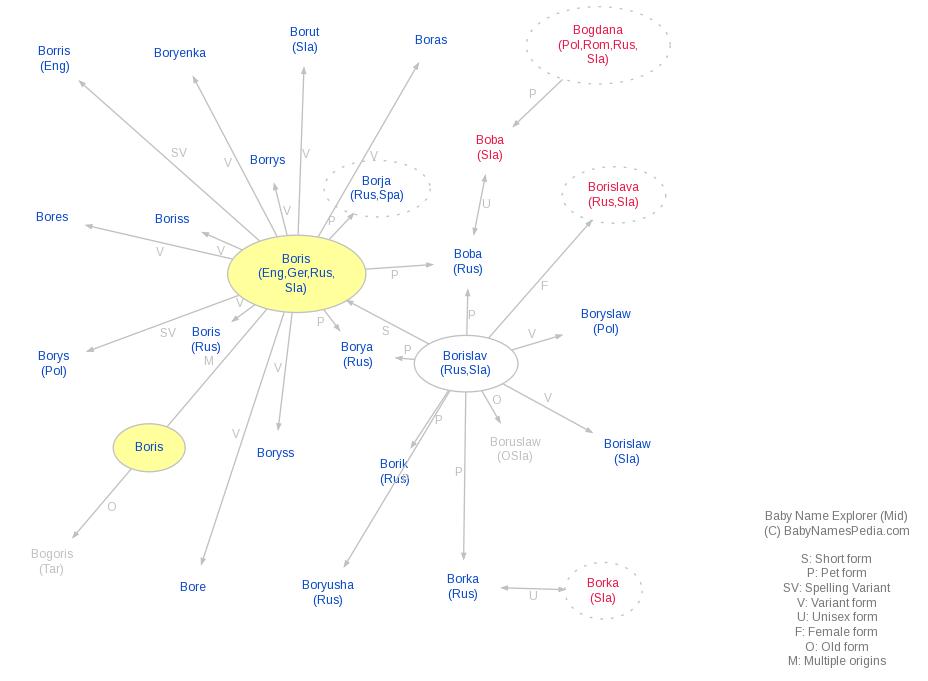