What does Boswell mean?

[ 2 syll. bo-swel(l), bos-we-ll ] The baby boy name Boswell is pronounced BOWZWehL- †. Boswell's origin is Old French, and its use, English. The name is of the meaning 'Beuze's settlement; settlement of the reckless one'. The first name is derived from the medieval Anglo-Scottish surname also recorded in forms such as Baswell, Busswell, and Buswell. The surname is itself ultimately of Old French origin; it was introduced at the time of the Norman Conquest by a subject of Duke William of Normandy, who took the name from the town of Beuzeville in Seine Maritime, Normandy. The place name is in turn derived from the Old French personal name 'Beuze', which originated from the Germanic boese, and the Old French element ville (meaning 'village, settlement').

Boswell is a rarely used baby name for boys. It is not listed in the top 1000 names. 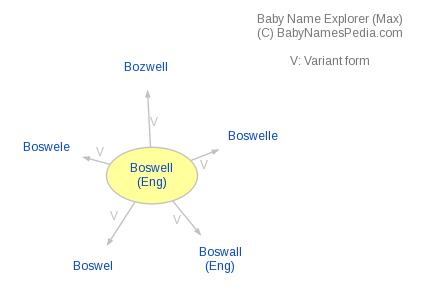