What does Brandon mean?

[ 2 syll. bran-don, br-and-on ] The baby boy name Brandon is pronounced as BRAENDahN †. Brandon is used chiefly in English, and its origin is Old English and Celtic. From Old English roots, its meaning is broom hill, hill covered with broom. It is derived from the elements 'brom' meaning broom, brambles ; 'dun' hill, mound, dune. The first name was originally a local name from several place names associated with the words 'brom' (meaning broom, brambles) and 'hill', and it was subsequently taken up as a surname. The first name has been used from the 19th century, possibly influenced by the similar-sounding Irish name Brendan, of which it is sometimes considered a variant. The fame of the Italian American actor Marlon Brando (1924-2004) has also influenced the adoption of the name. It is more common in USA than in other English speaking countries, and it is particularly popular among Afro-Americans.

Brandon is a variant of the name Brendan (English and Irish) in the English language.

Brandon has 19 variants that are used in English and other languages. English variants include Braddon, Bran, Brand, Brandan, Brandin, Brandone, Brandonn, Brandun, Brandy, Brandyn, Brannan, Brannin, Brannon, Brannun, Brannyn, Branton, and Brendon. Another English form is the spelling variant Branden. A variant of Brandon used in other languages is Brannen (Irish).

Brandon is popular as a baby name for boys. The name's popularity increased from the 1940s up to the 1980s; before that, it was of infrequent use only. At the height of its usage in 1985, 1.524% of baby boys were named Brandon. Its ranking then was #13. The baby name has since slipped in popularity. In 2018, its usage was 0.165% and its ranking #124, but it was nevertheless the most popular within all boy names in its group. In 2018, Brandon was used 7 times more than the subsequent ranked name, Brendan. The name Brandon has predominantly been a baby boy name, though it has also been given to girls in the past century. In 1988, Brandon as a baby boy name outnumbered its use as a girl name by 138 times. 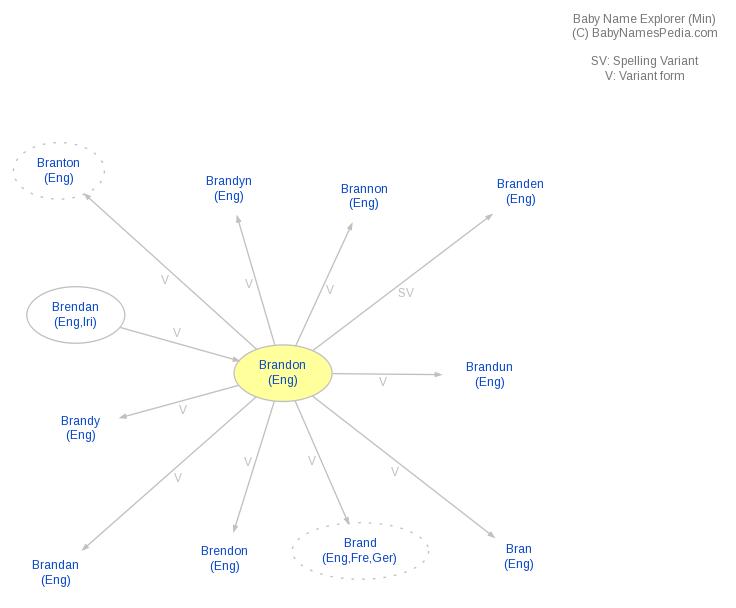