What does Braulio mean?

[ 3 syll. brau-lio, br-aul-io ] The baby boy name Braulio is sometimes used as a girl name. Its pronunciation is BR-AWLiy-ow †. Braulio is largely used in the English, Italian, and Spanish languages, and it is derived from Germanic and Middle English origins. From Germanic roots, its meaning is shining. The name was borne by Saint Braulio of Zaragoza (590-651), a Hispanic scholar and advisor of several Visigothic kings. In recent times, the name has been made known by the Latin American actor Braulio Castillo (1933-) and his teen-idol son, who has the same name.

Braulio is an Italian variant of the name Brawley.

Braulio is a rare baby name for boys. At the modest peak of its usage in 2005, 0.012% of baby boys were given the name Braulio. Its ranking then was #781. The baby name has since suffered a steep loss in popularity, and is now of sporadic use. Out of all boy names in its group, Braulio was nonetheless the most popular in 2018. In the past century Braulio has predominantly been a baby boy name. 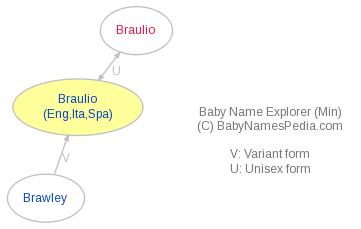