What does Bree mean?

[ 1 syll. bree, br-ee ] The baby girl name Bree is pronounced BRiy- †. Bree's language of origin is Celtic, and it is used largely in the English and Irish languages. In recent times, the name has been made known by the fictional Bree Hodge played by Marcia Cross in the American TV series Desperate Housewives (2004-).

In addition, Bree is an English pet form of the English and Irish Brianna.

Bree is also a form of the Irish Brígh.

Variant forms inherit the origin and meaning of the name Bree.

Bree is rare as a baby name for girls. At the modest peak of its usage in 1977, 0.017% of baby girls were given the name Bree. Its ranking then was #617. The baby name has since suffered a substantial drop in frequency, and is of only sporadic use now. In 2018, out of the group of girl names directly linked to Bree, Brianna was the most widely used. 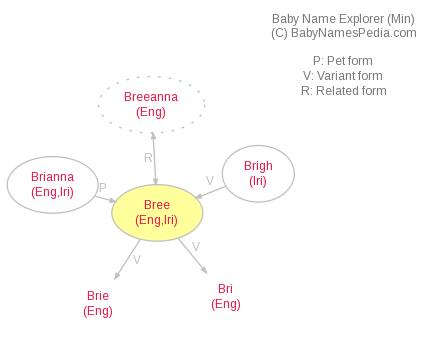