What does Brett mean?

[ 1 syll. bret(t), br-e-tt ] The baby boy name Brett is sometimes used as a girl name. Its pronunciation is BRehT †. Brett is largely used in the English language and it is derived from Old English origins. The name's meaning is breton. The first name is derived from the surname, which was originally taken up by the Breton people of Brittany who arrived in medieval England after the Norman Conquest and settled in East Anglia.

Bret (English variant spelling) is another form of Brett.

Brett is a classic favorite. Currently it is still somewhat popular as a baby name for boys, though not to the extent it was previously. The name's popularity jumped from the 1940s up to the 1980s; before that, it was of irregular use only. At the modest height of its usage in 1986, 0.246% of baby boys were given the name Brett. It ranked at #69 then. The baby name has since experienced a substantial loss in popularity. In 2018, its usage was 0.015% and its ranking #787. Within the group of boy names directly linked to Brett, Rhett was the most widely used. In 2018, it was used 8 times more than Brett. Brett has mostly been a baby boy name in the past century. In 1986, the name Brett was given to 26 times as many baby boys than girls. 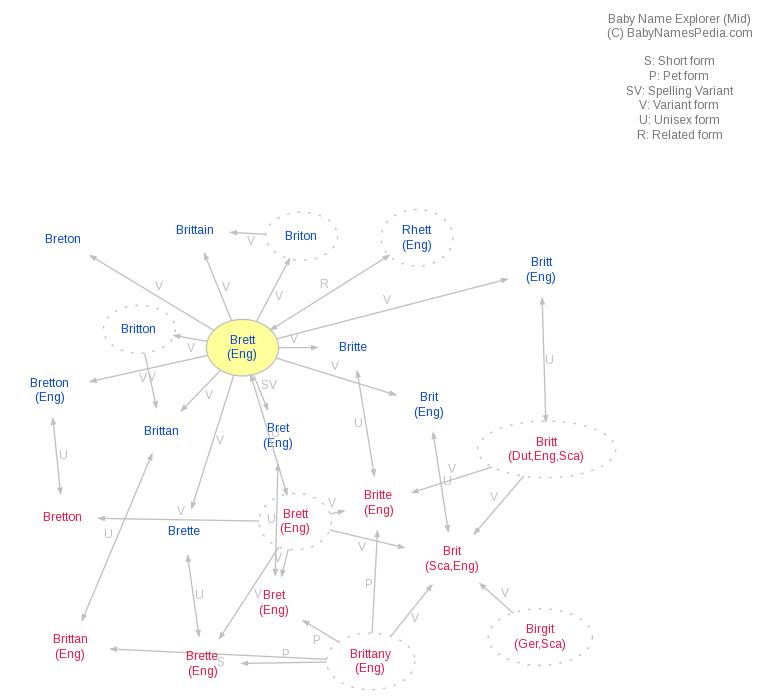