What does Bria mean?

[ 2 syll. bria, br-ia ] The baby girl name Bria is pronounced as BRIY-aa- †. Bria is of Celtic origin. It is used mainly in the English and Irish languages.

In addition, Bria is a short form of Brianna (English and Irish).

Variation transcriptions of Bria include Brea, Briah, Brya, and Bryah.

Variant forms inherit the origin and meaning of Bria.

Bria is somewhat popular as a baby girl name. The name rose in popularity during the 1990s; before that, it was of only irregular use. Its usage peaked modestly in 1993 with 0.086% of baby girls being given the name Bria. It had a ranking of #175 then. The baby name has fallen in popularity since then. In 2018, it ranked at #762 with a usage of 0.019%. Among the family of girl names directly linked to Bria, Brianna was the most popular. It was 6 times more popular than Bria in 2018. 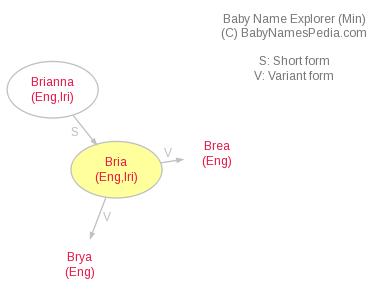