What does Bridget mean?

[ 2 syll. brid-get, br-idg-et ] The baby girl name Bridget is pronounced as BRIHJH-ahT (English) †. Bridget is used predominantly in English, Irish, and Scottish, and its origin is Celtic. Bridget's meaning is exalted one. It is derived from the elements 'brígh' which means strength, power, force ; 'briganti' exalted, divine. Brighid (Old Irish) and Brigid (Old Irish) are old forms of the name. The name Brighid was borne in Irish mythology by a goddess of fire, poetry, and wisdom; it could also have been associated with the ancient Celtic tribe of the Brigantes.

The name was also borne by Saint Brigid of Kildare (451-525), patron saint of Ireland and founder of the Kildare monastery. Much of the later legends surrounding the saint appear to be Christian forms of pagan tales on the goddess. As Saint Brigid was the most important of Irish female saints, the name was considered too sacred to use. It came into general use in Ireland only from the 17th century, and spread to other English speaking countries by the 18th century. The Scandinavian forms of the name owe their popularity to Saint Birgitta (1303-1373), patron saint of Sweden and founder of the Bridgettine Order.

The modern Gaelic short form Bríd is Anglicized as Bride, while Bidelia and Bedelia, both genteel elaborations, have fallen from favor. The pet forms Biddy and Biddie have also declined in use outside Ireland due to the association of the slang 'old biddy' with an 'old woman'. Biddy is known from the fictional Biddy Gargery in Charles Dickens' novel Great Expectations (1860). Elsewhere in literature, the name has been used by Henry Fielding for the character Bridget Allworthy in her comic novel Tom Jones (1749), and the character Bridget Jones in her Bridget Jones's Diary column (1995) and subsequent novels (1996,1999) which were made into successful films (2001,2004) starring Renée Zellweger as the titular lead.

What are the Variant Forms of Bridget?

Bridget is a classic favorite. Today it is still somewhat popular as a baby name for girls, though to a lesser extent than it was before. The name's popularity increased from the 1930s up to the 1970s. At the modest peak of its usage in 1973, 0.178% of baby girls were named Bridget. It ranked at #112 then. The baby name has since slipped in popularity. In 2018, its usage was only 0.021% and its ranking #718, but it was nevertheless the most commonly used out of all girl names in its group. 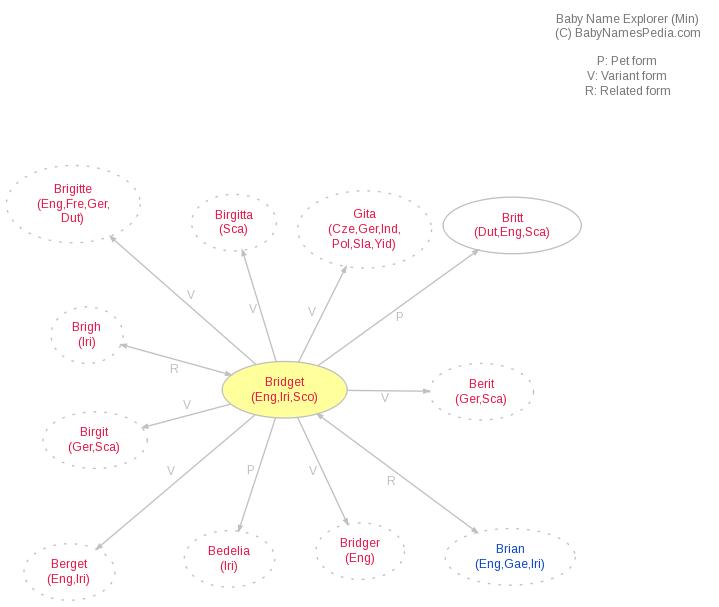