What does Briley mean?

[ 2 syll. bri-ley, br-il-ey ] The baby girl name Briley is also used as a boy name, though it is far more popular for girls. It is pronounced as BRIYLiy- †.

Briley has its origins in the Old English language and it is used largely in English. The name Briley means 'briar wood'. The first name is of uncertain origin; it could be taken from similar-sounding surnames like Brierly or Briarley, which originated from Brierley in Staffordshire or Brierly in South and West Yorkshire. The place name is of the Old English broer and leah (meaning 'wood, clearing, meadow').

Briley's origin is English-American. This could be a modern coinage from the letter 'B-' and the name Riley.

Briley is uncommon as a baby girl name. At the modest height of its usage in 2009, 0.024% of baby girls were named Briley. It had a ranking of #621 then. The baby name has seen a marked drop in popularity since then, and is used only on an infrequent scale today. Within the family of girl names directly related to Briley, Brylee was the most popular in 2018. 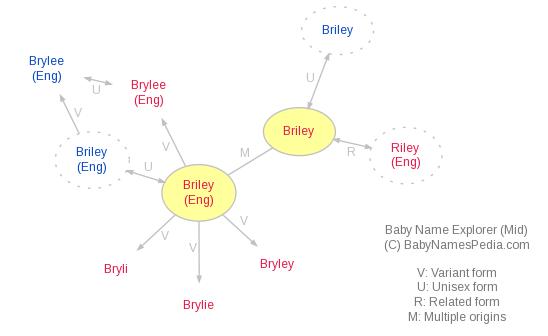