What does Brittany mean?

[ 3 syll. brit-ta-ny, br-itt-any ] The baby girl name Brittany is pronounced BRIHT-ahNiy- †. Brittany's origin is Old English, and its use, English. Brittany's meaning is 'from Little Britain'. It is from britannia meaning 'England' ; pretanike 'England'. The first name is derived from the Anglicized form of Bretagne, the name of the province in the peninsula to the northwest of France. The region was named after the Britons, who fled there after the Anglo-Saxon invasion of Britain. The place name Brittany was used in the Middle Ages to differentiate the province known also as Little Britain, from Great Britain. The ultimate source is thus Britannia, the early Roman term for the island of England, or Pretanike, the equivalent Greek term. The first name has been regularly adopted by English speakers only since the 20th century, especially in the US. The name is commonly found with two syllables, such as in the form Britney, which is famously borne by the US pop singer Britney Spears (1981-).

What are the Variant Forms of Brittany?

Brittany is an all-time favorite. Currently it is still somewhat popular as a baby name for girls, though to a lesser extent than it was previously. The name grew in popularity from the 1970s up to the 1980s; prior to that, it was of only irregular use. At the height of its usage in 1989, 1.897% of baby girls were named Brittany. It ranked at #3 then. The baby name has since markedly dropped in popularity. In 2018, it ranked at #879 with a usage of 0.017%, but it was nevertheless the most popular within all girl names in its group. Brittany has mostly been a baby girl name, although in the past century it has also been used for boys. In 1990, the name Brittany was given to 342 times more baby girls than boys. 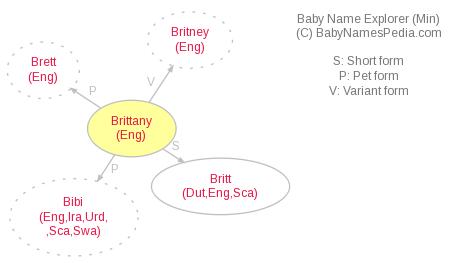