What does Broderick mean?

[ 3 syll. bro-de-ric(k), br-oderi-ck ] The baby boy name Broderick is pronounced as BRAA-D-erayK †. Broderick is largely used in the English language, and it is derived from Old English and Germanic origins. From Old English roots, its meaning is broad ridge. It is from the elements 'brad' meaning broad ; 'hrycg' ridge. The first name is derived from the surname, which is itself from various place names with prominent ridges in its vicinity. The name has recently gained wider adoption through the influence of the name Roderick.

Broderick is an English variant transcription of the name Roderick (English and German).

Broderick is an uncommon baby name for boys. At the modest height of its usage in 2009, 0.012% of baby boys were given the name Broderick. Its ranking then was #843. The baby name has since steeply declined in popularity, and is now of very light use. Within all boy names in its group, Broderick was nonetheless the most frequently used in 2018. 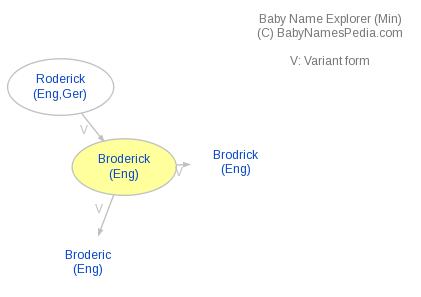