What does Brody mean?

[ 2 syll. bro-dy, br-ody ] The baby boy name Brody is sometimes used as a girl name. Its pronunciation is BROW-Diy- †. Brody is an English and Irish name of Celtic origin. It is from the element 'brothaigh' which means ditch, muddy place. Brothaigh (Old Irish) is an old form of Brody. The first name is derived from the surname, which is itself from various place names possibly associated with ditches. The name has been well used in Scotland despite the infamy of William Brodie (1741-1788), one of Scotland's most notorious burglar; he is commonly known by his prestigious title Deacon Brodie.

Brodie (English and Irish variant spelling) is another form of Brody.

Brody is popular as a baby name for boys. The name's popularity jumped from the 1980s up to the 2000s. At the modest peak of its usage in 2008, 0.291% of baby boys were given the name Brody. It ranked at #70 then. The baby name has since declined in popularity. In 2018, its usage was 0.128% and its ranking #156, but it was nonetheless the most popular out of all boy names in its group. In 2018, 11 times more boys were named Brody than the subsequent ranked name, Brodie. Brody has in the past century been mostly given to baby boys. 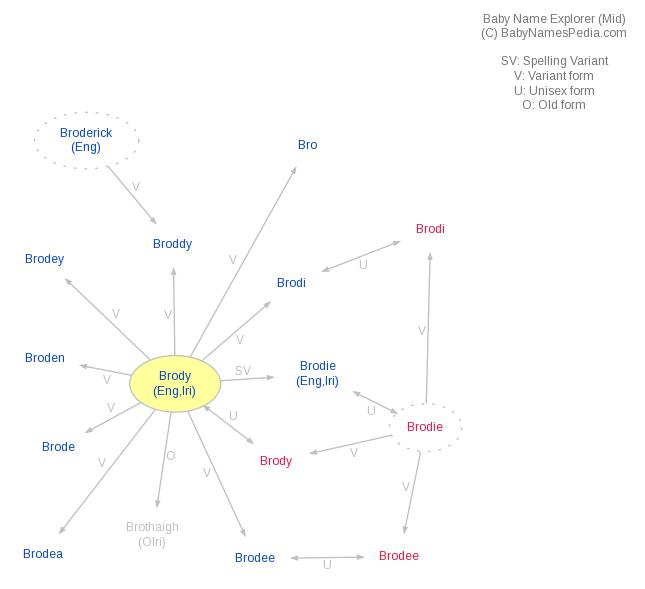