What does Brunhilde mean?

[ 2 syll. brun-hil-de, br-unhi-lde ] The baby girl name Brunhilde is pronounced as BR-NHHIHLDeh- †. Brunhilde is primarily used in the Dutch and German languages. It is of Germanic origin. It is a two-element name derived from the words 'brunni' + 'hild' which mean armour, protection + battle, fight respectively. An older form of Brunhilde is Brynhildr (Old Norse). In Norse mythology, Brunhilde was a warrior queen and the wife of Günther; she was the central character in the epic poem Nibelungenlied. In the Icelandic Völsunga saga, Brynhild was the the chief of the supernatural warrior maidens, the Valkyries. The historical basis of the character could have been Brunhilda (543-613), a Frankish queen infamous for her cruelty and avarice. The legendary queen, as well as the name, was later made known among English speakers by Richard Wagner's 19th-century opera cycle The Ring of the Nibelung. The modern use of the name is more likely found in literature.

Other forms of Brunhilde include the Italian diminutive Nilda and the German variant spelling Brunhild.

Brunhilde is a baby girl name of irregular use. It is not ranked within the top 1000. 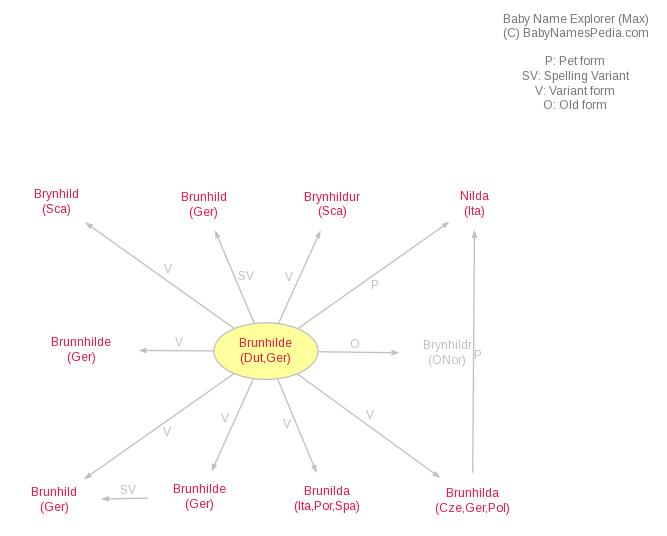