What does Bruno mean?

[ 2 syll. bru-no, br-uno ] The baby boy name Bruno is pronounced as BRUW-Now (German) †. Bruno is used predominantly in the Czech, English, French, German, Italian, Portuguese, Scandinavian, Slavic, Slovenian, and Spanish languages, and its origin is Germanic. It is derived from the element 'brun' which means brown. Brun (Germanic) is an old form of Bruno. The name was originally bestowed upon people with brown hair, eyes, or complexion. It was borne by many influential Germans in the medieval period, including three 10th-century saints, the 11th-century Saint Bruno of Cologne who founded the Carthusian Order, and the third son of Emperor Henry I the Fowler (876-936). The surname was borne by the Italian philosopher Giordano Bruno (1548-1600), an early proponent of heliocentrism who was burned at the stake by the Roman Inquisition. English speakers first adopted the name at the end of the 19th century, probably influenced by Lewis Carroll's Sylvie and Bruno (1889) as well as the growing German immigrant population in the USA. The name Bruna (German, Italian, and Portuguese) is the female version of Bruno.

Bruno is fairly popular as a baby name for boys. At the modest peak of its usage in 1915, 0.040% of baby boys were given the name Bruno. Its ranking then was #260. The baby name has since suffered a marked fall in popularity, and in recent years it is of sporadic use. In 2018, its usage was only 0.020% and its ranking #665, but it was nonetheless the most regularly used out of all boy names in its group. 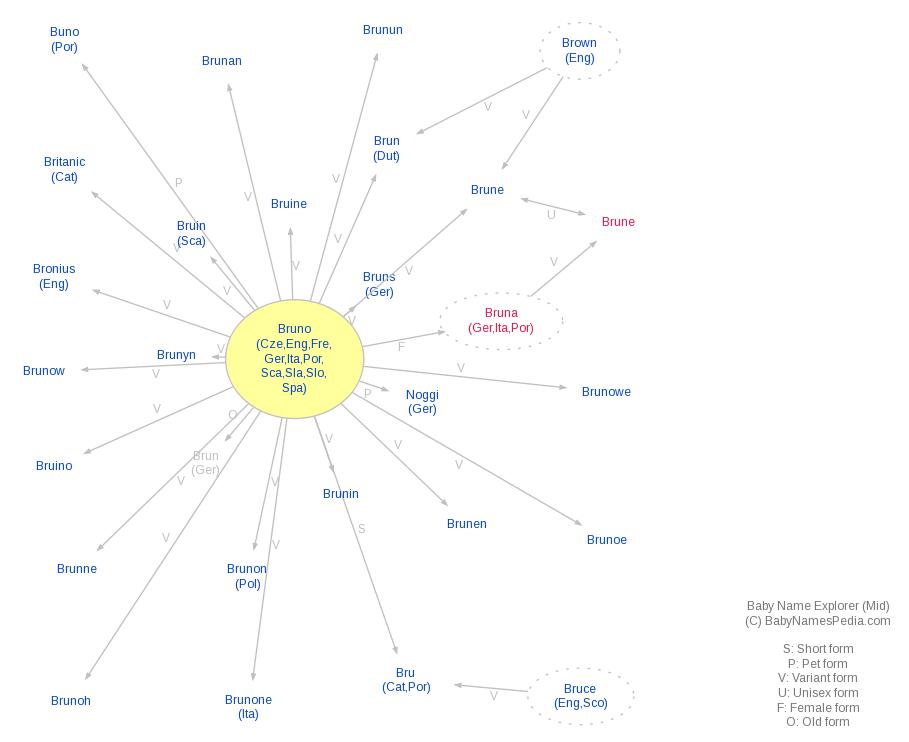