What does Bryant mean?

[ 2 syll. bryan(t), br-ya-nt ] The baby boy name Bryant is pronounced as BRIYaeNT †. Bryant has its origins in the Celtic language. It is used largely in the English and Irish languages. It is from the word brígh which means 'strength, power, force'. The first name is derived from the surname, which is itself from the first name Brian. The '-t' spelling could have been influenced by names such as Constant.

Bryant is an English and Irish form of the English, Gaelic, and Irish Brian.

Forms of Bryant include the names Briant, Bry, Bryan, and Bryent.

Bryant is an all-time favorite. Currently it is still rather popular as a baby boy name, but to a lesser degree than it was in the past. The name jumped in popularity from the 1940s up to the 1980s. Its usage peaked in 1988 with 0.086% of baby boys being given the name Bryant. It had a ranking of #163 then. The baby name has experienced a decline in frequency since then. In 2018, it ranked at #684 with a usage of 0.018%. Among the family of boy names directly linked to Bryant, Bryan was the most popular. It was more widely used than Bryant by 5 times in 2018. 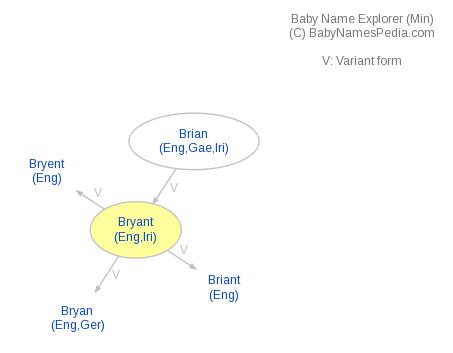