What does Brynn mean?

[ 1 syll. bryn(n), br-y-nn ] The baby girl name Brynn is also used as a boy name, though it is far more popular for girls. It is pronounced BRihN †. Brynn is of Celtic and Welsh origin. It is used mainly in English. Welsh origin: It is derived from the word bryn with the meaning 'hill'. It represents the transferred use of the geographic name as a given name.

In addition, Brynn is a form of the English and Irish Brianna.

Brynn is also an English form of the English and Welsh Bryn.

Brynn is the feminine equivalent of the English and Welsh Bryn.

The spelling variants Brinn (English), Bryn (English and Welsh), and Brynne (English) are other forms of the name.

Brynn is rather popular as a baby girl name. The name has been rising in popularity since the 1990s. At the modest peak of its usage in 2011, 0.086% of baby girls were named Brynn. It was #190 in rank then. In 2018, it ranked at #305 with a usage of 0.059%. Out of the family of girl names directly related to Brynn, Brianna was the most frequently used. The name was twice as popular as Brynn in 2018. Brynn has in the last century been primarily given to baby girls. 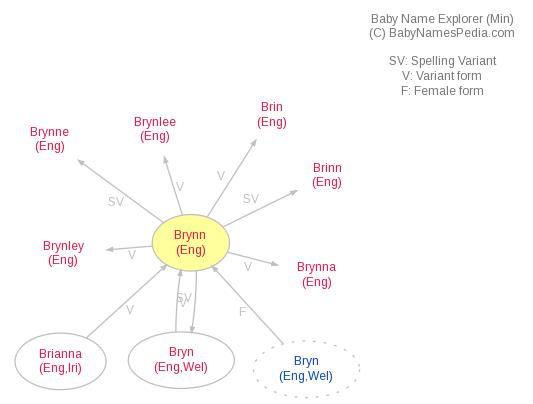