What does Buddy mean?

[ 2 syll. bud-dy, bu-ddy ] The baby boy name Buddy is pronounced as BAHDiy †. Buddy is mainly used in the English language and it is also of English origin. The name is derived from the English word 'buddy' (meaning friend, companion, brother), which may itself have originated as a babyish pronunciation of 'brother'.

The names Budde, Buddee, Buddi, Budie, and Budy are variant forms of Buddy.

Other variants of Buddy include the short forms Bud (English) and Budd (English), and the diminutive forms Buddey, Buddie, Budi, and Budster.

Buddy is uncommon as a baby name for boys. At the modest height of its usage in 1935, 0.057% of baby boys were given the name Buddy. It ranked at #202 then. The baby name has since fallen out of favor, and is today of sporadic use. Within all boy names in its group, Buddy was nonetheless the most popular in 2018. 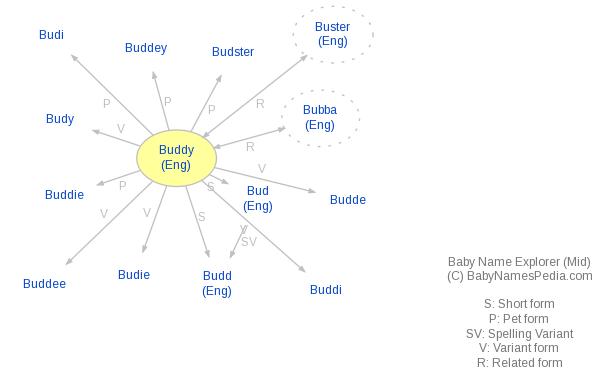