What does Buford mean?

[ 2 syll. bu-for(d), buf-o-rd ] The baby boy name Buford is pronounced BUWFaoRD †. Buford is of Old English and English origin. It is used mainly in English. From Old English roots, its meaning is 'ford by the aviary'. Its meaning is from the word ford. The first name is derived from the surname, which itself originated as a local name for someone from various places so named in England.

Buford is a derivative of the name Burford.

A derivative of Buford is the name Burford.

Other forms of the name include the English familiar form Ford and the English spelling variant Beuford.

Buford is rare as a baby boy name. At the modest peak of its usage in 1910, 0.030% of baby boys were named Buford. It was #311 in rank then. The baby name has markedly slipped in popularity since then, and is currently used only on an infrequent scale. Out of the family of boy names directly related to Buford, Ford was the most popular in 2018. 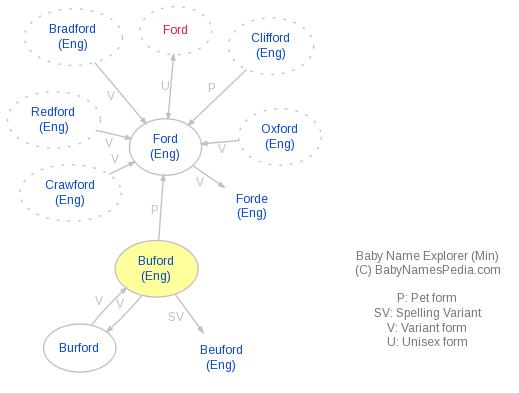