What does Byron mean?

[ 2 syll. by-ron, byr-on ] The baby boy name Byron is pronounced as BAYRaaN †. Byron is primarily used in the English language and it is of Old English origin. It is from the element 'byre' which means cow sheds. The first name is derived from the surname for someone who lived or worked at a cattle shed. The surname is itself from the Old English 'aet thaem byrum' which means 'at the cow sheds'. The first name was originally bestowed in honor of the famous English Romantic poet Lord Byron (1788-1824), who inherited the barony at the age of 10. The first Lord Byron was John Byron (1600-1652), who was conferred the title in reward for supporting Charles I in the Civil War.

Byron is a classic favorite. Currently it is still a somewhat popular baby name for boys, though it was in more widespread use previously. At the modest height of its usage in 1967, 0.066% of baby boys were given the name Byron. Its ranking then was #196. The baby name has since experienced a decline in frequency, and is now of occasional use. In 2018, its usage was 0.017% and its ranking #738, but it was nonetheless the most popular within all boy names in its group. 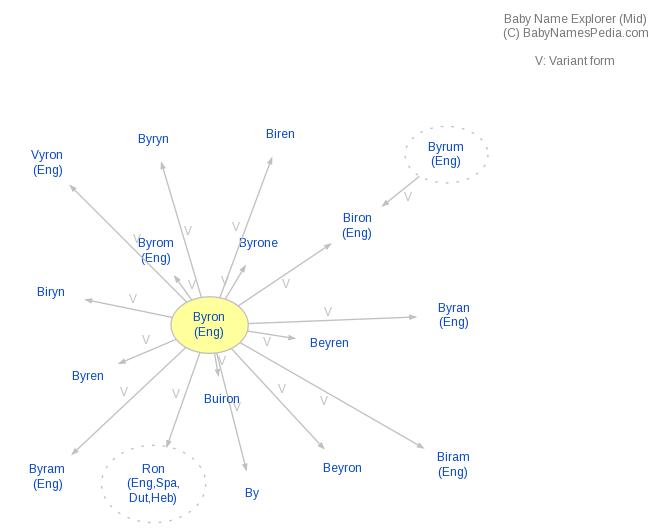