What does Cadence mean?

[ 2 syll. ca-den-ce, cad-e-nce ] The baby girl name Cadence is also used as a boy name, though it is far more popular for girls. It is pronounced KEY-DahNZ †. Cadence's origin and use are both in the English language. The English word cadence refers to the rhythmic flow of sounds; it is ultimately of the Latin cadens. In literature, the name has appeared in Armistead Maupin's novel Maybe the Moon (1992); in film, the name has appeared in American Wedding (also known as American Pie 3) (2003).

Cadence is rather popular as a baby girl name. The name increased in popularity during the 2000s; prior to that, it was of only infrequent use. At the modest peak of its usage in 2005, 0.083% of baby girls were named Cadence. It had a ranking of #206 then. The baby name has experienced a decline in popularity since then. In 2018, it ranked at #488 with a usage of 0.035%, but it was nevertheless the most popular out of all girl names in its family. Cadence was 6.790% more popular than the 2nd ranked name, Kaydence, in 2018. Cadence has in the last century been mainly given to baby girls. 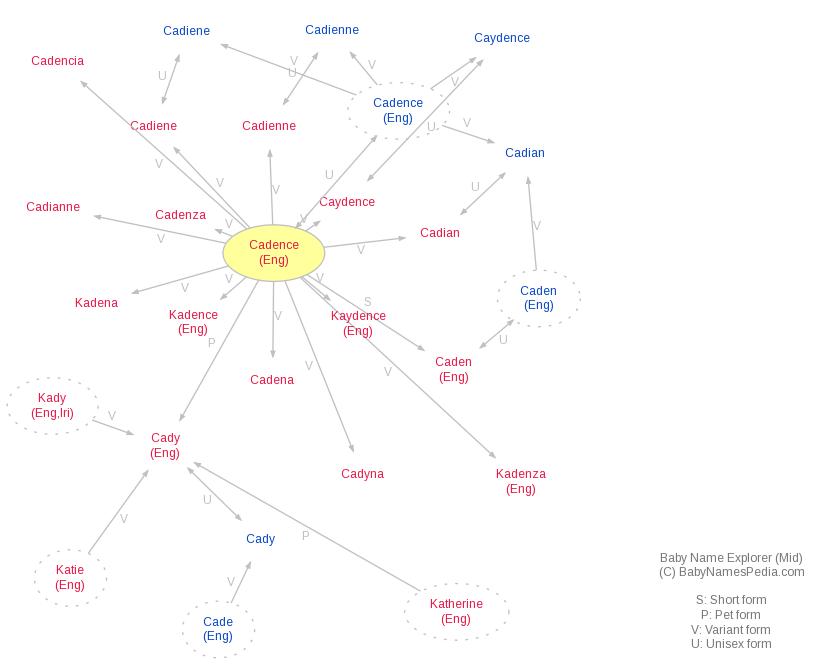