What does Caesar mean?

[ 2 syll. cae-sar, ca-es-ar ] The baby boy name Caesar is pronounced in English as SIY-ZahR †. Caesar is used predominantly in the English language and its origin is Latin. The name is of the meaning he who was cut out of the womb, he with a head of hair, blue-grey color. Caesar (Latin) and Cäsarius (Germanic) are original forms of Caesar. The first name is from the Roman family name, of which the most famous members were Gaius Julius Caesar (100-44BC) and his adopted son Julius Caesar Octavianus (63BC-14AD), commonly known as Augustus. The term Caesar was also used as a title by Roman emperors and Ottoman Turkish emperors. The meaning of the name is uncertain, but a popular interpretation is 'he who was cut out of the womb' from the Latin 'caedere' (meaning to cut, to excise), or else it could be associated with the Latin 'caesaries' or 'caesius'. The name Cesira (Italian) is the female version of Caesar.

The name Caesar is used to a great extent; it has 33 variants that are used in English and other languages. Variants used in English include Caesare, Caesario, Caesarius, Caesear, Caeser, Caezar, Casare, Ceasar, Ceazer, Cesar (used in German and Spanish too), Cesare (used in Italian too), Cesaro, Cezar (used in Polish, Portuguese, Romanian, and Slavic too), César (used in French, Portuguese, and Spanish too), Chezare, Czar, Kaiser (used in German and Slavic too), Seasar, and Sezar.

Caesar is unusual as a baby name for boys. Its usage peaked modestly in 1904 with 0.011% of baby boys being given the name Caesar. Its ranking then was #589. The baby name has since experienced a substantial fall in popularity, and is currently of infrequent use. In 2018, among the group of boy names directly linked to Caesar, Cesar was the most widely used. 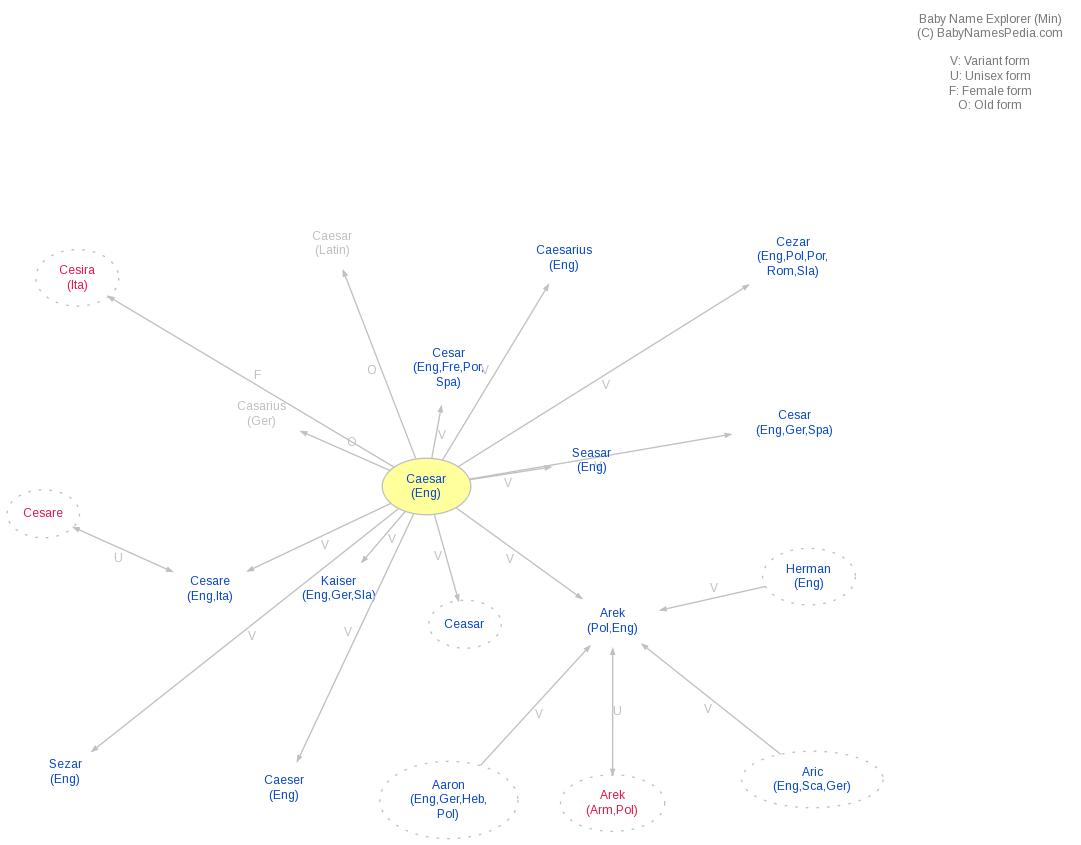