What does Calliope mean?

[ 4 syll. cal-lio-pe, ca-lli-ope ] The baby girl name Calliope is pronounced as Kah-LAY-ah-Piy (English) †. Calliope is used chiefly in the Greek and Latinized languages, and it is derived from Old Greek origins. Calliope is of the meaning beautiful voice. It is derived from the elements 'kalos' which means fair, beautiful, handsome ; 'ops' voice. The name was borne by the muse of epic poetry, one of the nine Muses in Greek mythology. She was one of the daughters of Zeus and was well-known as Homer's inspiration for the Iliad and the Odyssey.

Calliope is somewhat popular as a baby name for girls. The name's popularity has been rising since the 2010s; before that, it was of infrequent use only. At the modest peak of its usage in 2018, 0.018% of baby girls were named Calliope. Its ranking then was #807. In 2018, out of the group of girl names directly related to Calliope, Callie was the most regularly used. Its use outnumbered Calliope's by 5 times in that year. 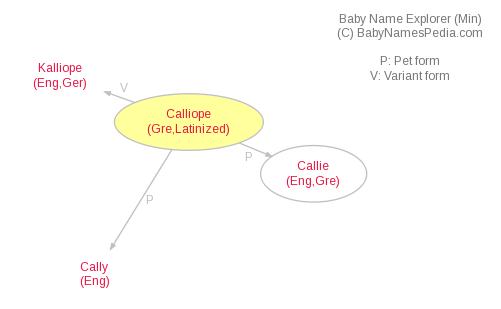