What does Calum mean?

[ 2 syll. ca-lum, cal-um ] The baby boy name Calum is pronounced as KAEL-ahM †. Calum is an English and Scottish name of Latin and Celtic origin. Latin origin: A biblical name, it is derived from the element 'columba' which means dove. Columba (Latin) is an old form of Calum. The name was popular with early Christians as its meaning is symbolic of peace, purity, and the Holy Spirit. The name was borne by Saint Columba of Scotland (521-597), an outstanding Gaelic missionary monk who converted many Scots to Christianity; his fame contributed to the popularity of the name in Scotland. In Ireland, the name became Colm and then Colum, which in turn gave rise to Calum or Callum in Scotland; the Scottish forms were later adopted by English speakers in the 20th century.

In addition, Calum is a variant of the name Malcolm (English and Scottish).

The name Calumina (English and Scottish) is the female version of Calum.

Calum is not regularly used as a baby name for boys. It is not listed in the top 1000 names. Out of the group of boy names directly linked to Calum, Malcolm was the most commonly used in 2018. 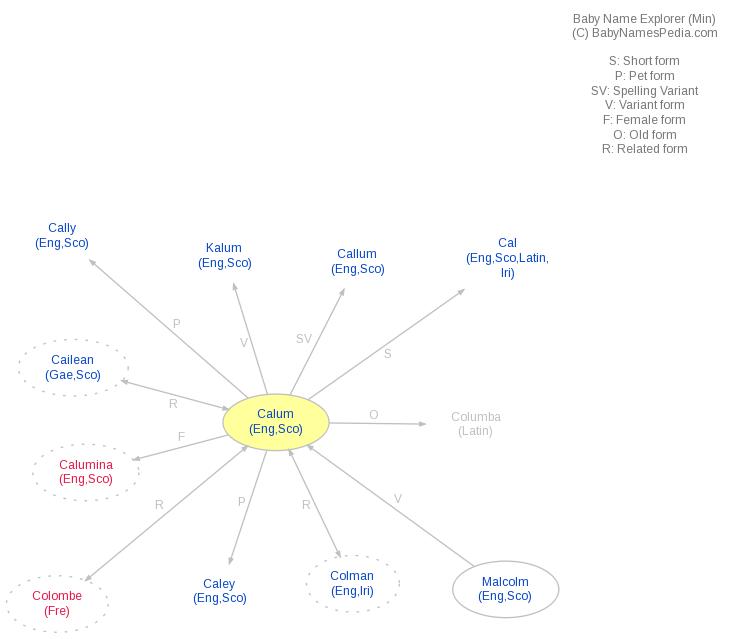