What does Calvin mean?

[ 2 syll. cal-vin, ca-lv-in ] The baby boy name Calvin is pronounced as KAELVihN †. Calvin is largely used in the English and German languages, and its origin is Old French. The name is of the meaning little bald one. Calvinus (Latinized) is an older form of Calvin. The first name is derived from the French surname Chauvin, which is from a diminutive of the Norman and Picard 'calve', itself from the Old French adjective 'chauve', cognate with the Latin 'calvus'. The given name was first adopted in honor of Jean Chauvin (John Calvin) (1509-1564), a French theologian and Protestant Reformation leader who gave his name to the Calvinist movement. The name was taken to America by early Protestant settlers and adopted by English speakers from the 16th century. It is also known from the imaginative boy character in Bill Watterson's comic strip Calvin and Hobbes (1985-1995). The name Calvina (Italian) is the female equivalent of Calvin.

Calvin has 15 variants that are used in English and other languages. Variants used in English include Calv, Calvan, Calven, Calvie, Calvien, Calvineo, Calvinio, Calvon, Calvun, Calvyn, Kal, and Kalvin. The contraction Cal (used in Latin too), and the pet form Vinny are other English variants. A variant of Calvin in other languages is Calvino (Italian and Spanish).

Calvin is popular as a baby name for boys, and it is also viewed as trendy. At the modest height of its usage in 1924, 0.420% of baby boys were given the name Calvin. Its ranking then was #44. The baby name has since experienced a fall in popularity. In 2018, its usage was 0.142% and its ranking #143, enjoying a minor resurgence in the recent decade. Within all boy names in its group, Calvin was the most commonly used. 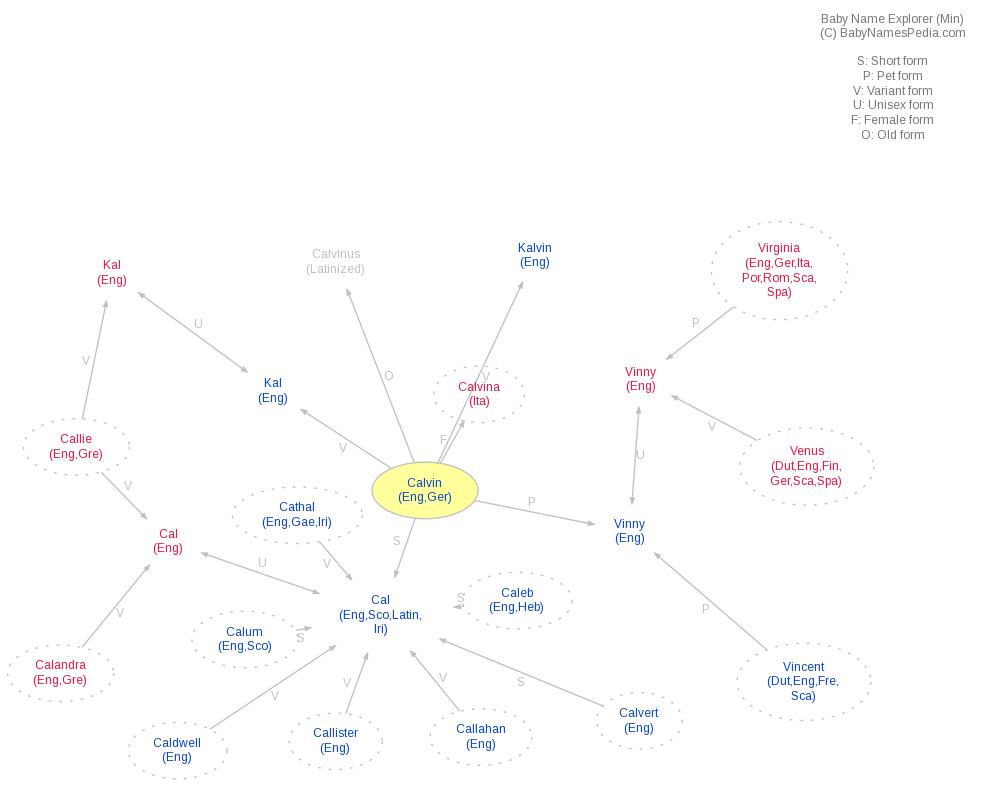