What does Calvina mean?

[ 3 syll. cal-vi-na, ca-lv-ina ] The baby girl name Calvina is pronounced as KaaLVIYNAH †. Calvina's language of origin is Old French and it is predominantly used in Italian. It is derived from calve which means 'bald' ; chauve 'bald' ; calvus 'bald'. Calvina is the feminine version of the English and German Calvin.

Calvina is not commonly used as a baby girl name. It is not in the top 1000 names. In 2018, among the family of girl names directly related to Calvina, Callie was the most frequently used. 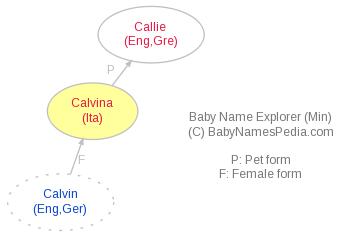