What does Camden mean?

[ 2 syll. cam-den, ca-md-en ] The baby boy name Camden is sometimes used as a girl name. It is pronounced as KAEMDehN †.

Camden is used chiefly in the English and Scottish languages, and it is derived from Old English origins. The name's meaning is enclosed valley. The first name is derived from the surname which is itself from a place name with the Old English elements 'camp' and 'denu', or else from it could be from Scottish Gaelic. It has sometimes been bestowed in tribute to the English historian William Camden (1551-1623).

Camden is of Scottish origin. Here, it means winding valley. It represents the transferred use of the geographic name and the surname as a given name.

Camden is popular as a baby name for boys, and it is also considered fairly trendy. The name's popularity has been growing since the 1980s; before that, it was of infrequent use only. Its usage peaked modestly in 2013 with 0.193% of baby boys being given the name Camden. Its ranking then was #99. In 2018, its usage was 0.132% and its ranking #152, and it was the most popular among all boy names in its group. In 2018, Camden was more widely used than the next most popular name, Kamden, by 4 times. 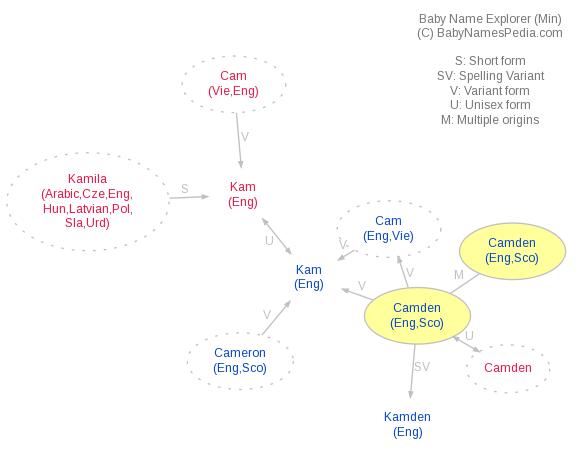