What does Cameron mean?

[ 3 syll. ca-me-ron, cam-er-on ] The baby boy name Cameron is also used, but less often, as a girl name. It is pronounced in English as KAEM-ah-RahN or KAEM-RahN †. Cameron is used chiefly in the English and Scottish languages, and its origin is Celtic. The name's meaning is crooked nose. It is from the elements 'cam' meaning crooked ; 'shron' nose. The first name is derived from the surname borne by the famous Scottish clan; the clan name itself originated from an ancestor with a crooked nose. The popularity of the Scottish first name could be attributed to two Scots, the theologian John Cameron (1579-1623) and the preacher Richard Cameron (1648-1680). The first name has been in use by English speakers since the 20th century.

What are the Variant Forms of Cameron?

Cameron is popular as a baby name for boys. The name's popularity rose from the 1940s up to the 2000s. Its usage peaked in 2000 with 0.612% of baby boys being given the name Cameron. It ranked at #31 then. The baby name has since experienced a fall in popularity. In 2018, its usage was 0.273% and its ranking #69, but it was nonetheless the most popular among all boy names in its group. In 2018, 5 times more boys were named Cameron than the subsequent ranked name, Kameron. Cameron has in the past century been mostly given to baby boys. In 2017, the name Cameron was given to 10 times as many baby boys than girls. 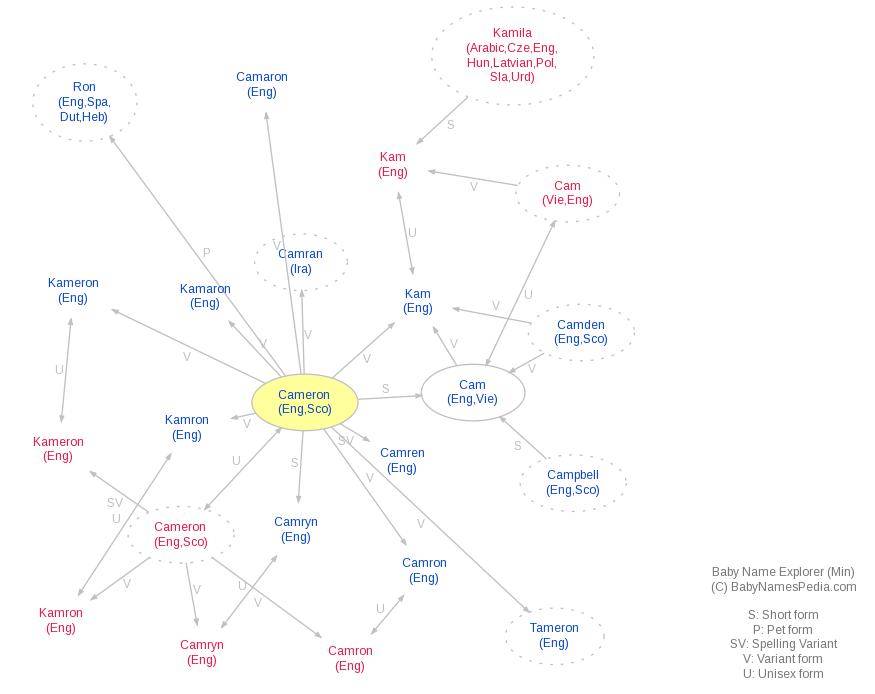