What does Camilla mean?

[ 3 syll. ca-mil-la, cam-i-lla ] The baby girl name Camilla is pronounced Kah-MIHL-ah in English or Kaa-MIYL-aa in Italian †. Camilla's origin is Latin, and its use, English, Finnish, German, Italian, Scandinavian, and Spanish. The meaning of Camilla is 'acolyte, attendant at a ritual'. It is derived from the word camillus which is of the meaning 'acolyte'. In Roman rituals, Camilli and Camillae were respectively the names given to boy and girl attendants. In Roman mythology, Camilla was the swift-footed attendant to Diana; she was also a warrior queen who fought Aeneas and the Trojans, as recorded in Virgil's Aeneid (30-19 BC). The first name has been in use by English speakers since the 13th century. It was later popularized via literature, as the name of the titular heroines in Fanny Burney's novel Camilla (1796) and Alexandre Dumas' novel The Lady of the Camellias (1848). It has also been known recently as the name of the Duchess of Cornwall, Camilla Parker-Bowles (1947-). The form Camille was briefly popularized in America by Hurricane Camille (1969). Camilla is the feminine equivalent of the Italian Camillo.

What are the Variant Forms of Camilla?

Camilla is rather popular as a baby girl name, and it is also regarded as trendy. The name has been increasing in popularity since the 2000s. At the modest height of its usage in 2018, 0.059% of baby girls were named Camilla. It was #302 in rank then. In 2018, within the family of girl names directly related to Camilla, Camila was the most regularly used. It was 7 times more widely used than Camilla in that year. 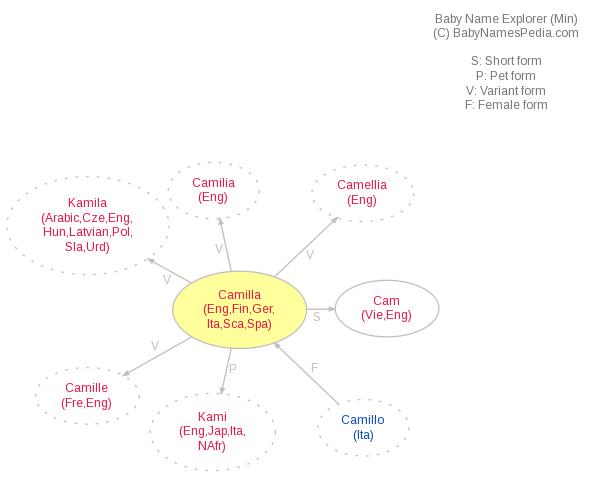