What does Candace mean?

Candace is primarily used in English and its language of origin is African-Ethiopia. Biblical name: The name is of debated origin, possibly from the Cushitic for 'queen mother', or else it could be of Greek or Latin origin. It was the hereditary name of a long succession of queens of Ethiopia. In the Bible, one of these queens was mentioned by the apostle Philip, who baptized a man who served under 'Candace queen of the Ethiopians'. The name Candace was first adopted by English speakers in the 17th century, followed by the form Candice in the early 20th century. In literature, it has appeared in William Faulkner's novel The Sound and the Fury (1929) as the name of the central character Candace "Caddy" Compson.

What are the Variant Forms of Candace?

Variant forms inherit the origin and thus the meaning of the name Candace.

Candace is rare as a baby name for girls. At the modest peak of its usage in 1982, 0.157% of baby girls were given the name Candace. Its ranking then was #103. The baby name has since markedly fallen in popularity, and is currently of only infrequent use. Out of all girl names in its group, Candace was nonetheless the most commonly used in 2018. 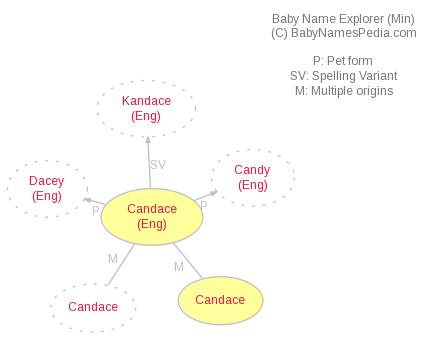