What does Carey mean?

[ 2 syll. ca-rey, car-ey ] The baby girl name Carey is also used as a boy name, with the latter form being slightly more popular. It is pronounced KEHR-iy- †.

Carey has its origins in the Old Welsh language. It is used largely in English and Irish. The meaning of Carey is 'from Carew Castle; from the hill fort'. It is derived from the word caer rhiw with the meaning 'hill fort'. It represents the transferred use of the geographic name and the surname as a given name. See Carey for more information.

Carey's language of origin is Irish. Here, the meaning is 'descendent of Ciardha; descendent of the dark one'. It represents the transferred use of the surname as a given name. See Carey for more information.

Carey is of Latin origin. Meaning: 'mover of goods'. Its meaning is derived from the word carriarus. It represents the transferred use of the job title as a given name. See Carey for more information.

In addition, Carey is a familiar form of the English, German, and Italian Cara in the Welsh language.

Carey is also a form of the English Carol.

Carey is also a spelling variant of the English Carrie.

Carey is also a form of the English Cary.

Carey is uncommon as a baby girl name. At the height of its usage in 1975, 0.049% of baby girls were named Carey. It had a ranking of #304 then. The baby name has markedly slipped in popularity since then, and is currently used only on a very modest scale. Within the family of girl names directly related to Carey, Cara was the most popular in 2018. 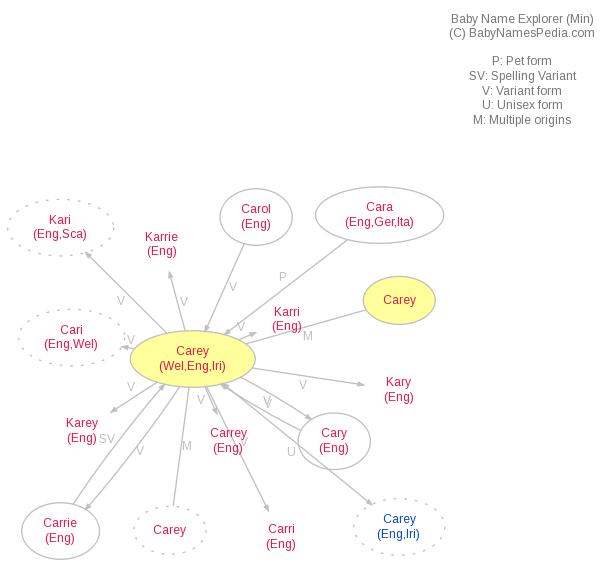