What does Carey mean?

[ 2 syll. ca-rey, car-ey ] The baby boy name Carey is sometimes used as a girl name. Its pronunciation is KEHR-iy- †.

Carey is used chiefly in the English and Irish languages, and its origin is Old Welsh. The name is of the meaning from Carew Castle; from the hill fort. The name could be derived from Welsh, Irish, or Latin roots. Carew is a Welsh surname derived from the place name Carew Castle in Pembrokeshire, Wales, and it is ultimately from the Welsh 'caer rhiw'. The Welsh surname 'de Carew' was first adopted in the early 12th century; in the later part of the century it was taken to Ireland by followers of Strongbow, Earl of Pembroke.

Carey is of Latin origin. Its meaning is from the element 'carriarus'. The name could be derived from the Latin 'carriarus', a term which developed into an occupational surname for one who worked as a 'mover of goods'.

Carey is a variant of the name Cary (English).

Carey is an uncommon baby name for boys. At the modest height of its usage in 1957, 0.021% of baby boys were given the name Carey. It ranked at #351 then. The baby name has since fallen from favor, and is currently of infrequent use. Within all boy names in its group, Carey was nonetheless the most widely used in 2018. 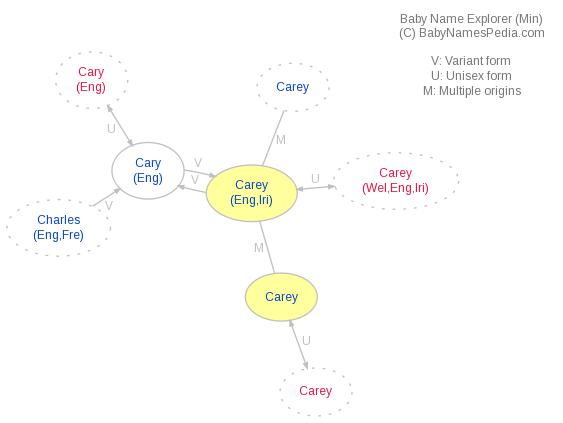