What does Carl mean?

[ 1 syll. car(l), ca-rl ] The baby boy name Carl is sometimes used as a girl name. Its pronunciation is KAARL (English, German) †. Carl is used predominantly in the English, German, and Scandinavian languages, and it is derived from Irish Gaelic, Breton, Old English, and Germanic origins. Carl was an older form of the German name Karl. The latter was brought by German and Scandinavian immigrants into the USA, where it was subsequently re-spelled as Carl by English speakers.

Carl is a variant of the name Carlin (English).

Carl is also a variant of the name Carlisle (English).

Carl is also a short form (English and German) of the name Carlton (English).

Carl is a classic favorite. Today it is still fairly popular as a baby name for boys, though to a lesser extent than it was before. At the peak of its usage in 1915, 0.751% of baby boys were given the name Carl. Its ranking then was #22. The baby name has since substantially fallen in popularity, and is currently of occasional use. In 2018, its usage was only 0.018% and its ranking #700. Out of the group of boy names directly linked to Carl, Charles was the most commonly used. In 2018, its use outnumbered Carl's by 19 times. Carl has predominantly been a baby boy name in the past century. In 1931, 126 times as many baby boys than girls were given the name Carl. 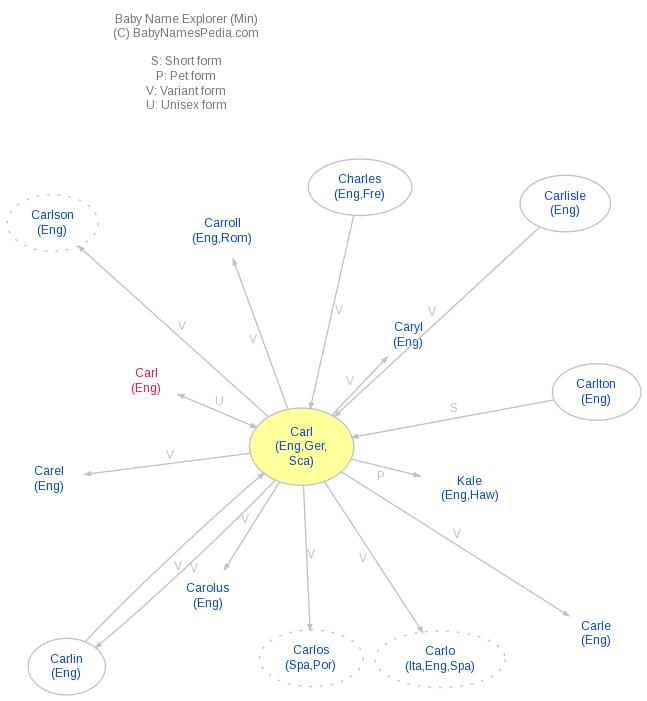