What does Carlo mean?

[ 2 syll. car-lo, ca-rlo ] The baby boy name Carlo is pronounced as KAA-RLow †. Carlo is used chiefly in Italian, English, and Spanish. Its origin is Germanic.

Carlo is a variant of the name Carl (English, German, and Scandinavian) in the Italian language.

Carlo is also a variant of the name Carlos (Spanish and Portuguese) in the Spanish language.

Carlo is also a variant of the name Charles (English and French) in the Italian and Spanish languages.

Carolo, Charlo, Giancarlo (English and Italian), and Karlo are variants of Carlo.

Variant forms share the origin and meaning of Carlo.

Carlo is rare as a baby boy name. At the modest peak of its usage in 1914, 0.015% of baby boys were named Carlo. It had a ranking of #473 then. The baby name has markedly dropped in popularity since then, and is today of infrequent use. Out of the family of boy names directly related to Carlo, Charles was the most widely used in 2018.

There are no famous persons named Carlo. 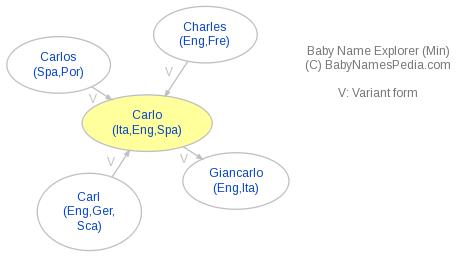