What does Carlotta mean?

[ 3 syll. car-lot-ta, ca-rlo-tta ] The baby girl name Carlotta is pronounced KaaRLOW-T-aa- †. Carlotta's language of origin is Germanic. It is predominantly used in Italian, English, and Spanish.

In addition, Carlotta is a diminutive (Italian) of Carla (English, German, Italian, Portuguese, Latin, and Scandinavian).

Carlotta is also a variation (Italian) of Caroline (English, French, and Scandinavian).

Carlotta has 14 variations. Variations of the name include Carleta, Carletta, Carlette, Carlita, Carlite, Carlot, Carlota, Carlott, Carlottah, Carlotte, Carolet, and Karlotta. Other English variants include the contracted form Carl, and the diminutive Lola (used in Spanish too).

The origin and thus the meaning of Carlotta is inherited by all variant forms.

Carlotta is a rare baby girl name. At the modest peak of its usage in 1948, 0.015% of baby girls were named Carlotta. It had a ranking of #517 then. The baby name has suffered a steep drop in popularity since then, and is currently of only irregular use. In 2018, out of the family of girl names directly related to Carlotta, Charlotte was the most popular. 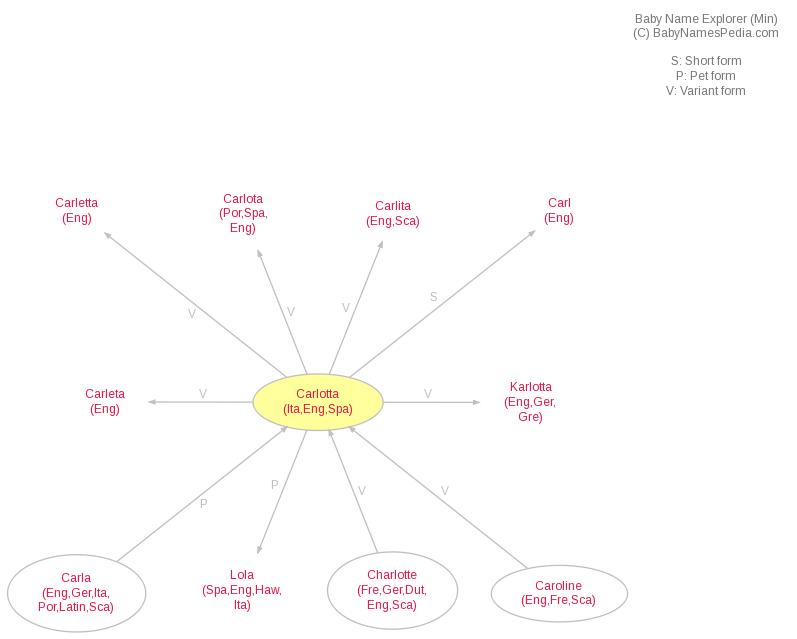