What does Carlton mean?

[ 2 syll. car-(l)ton, ca-rlt-on ] The baby boy name Carlton is pronounced as KAA-RLTahN †. Carlton is largely used in English, and its origin is Old English and Germanic. From Old English roots, its meaning is settlement of free men, peasant settlement. It is from the elements 'ceorl' which means man, free man ; 'tun' town, settlement, homestead. The first name is derived from the surname, which is itself from a place named 'ceorlatun' in Old English; the etymology of the place name is ultimately related to that of the name Charles. The first name has been adopted since the 19th century. It is pronounced with a 'k' sound, reflecting Anglo-Scandinavian influence. The form Charlton is also derived from the surname, itself a variant of the surname Carlton; this form has been made popular by the actor Charlton Heston (1924-), whose first name was taken from his mother's maiden name.

Carlton is an English variant transcription of the name Charles (English and French).

Carlton is a rare baby name for boys. At the peak of its usage in 1937, 0.050% of baby boys were named Carlton. Its ranking then was #217. The baby name has since suffered a steep loss in popularity, and is now of very modest use. In 2018, out of the group of boy names directly related to Carlton, Charles was the most widely used. 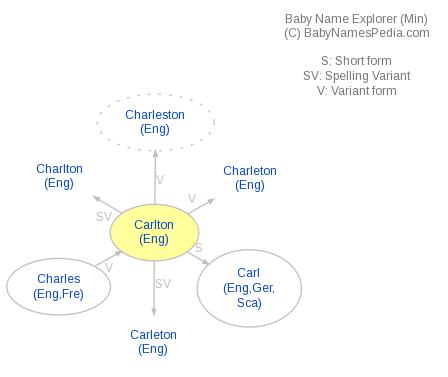