What does Carlyle mean?

[ 2 syll. car-ly-le, ca-rl-yle ] The baby girl name Carlyle is also used as a boy name, with the latter form being far more popular. It is pronounced KAARLAYL †. Carlyle is of Germanic and Breton origin. It is used mainly in English. From Breton roots, its meaning is 'from the castle tower; from the island fort'.

In addition, Carlyle is an English form of the English, German, Italian, Portuguese, Latin, and Scandinavian Carla.

Carlyle is not often used as a baby girl name. It is not in the top 1000 names. Carlyle has in the last century been mainly given to boys. 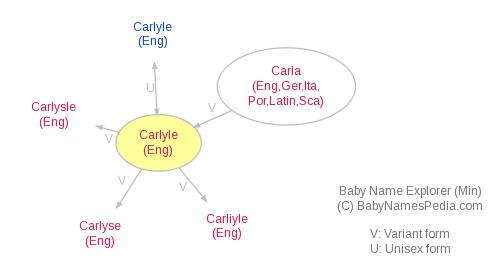