What does Carmelo mean?

[ 3 syll. car-me-lo, ca-rm-elo ] The baby boy name Carmelo is pronounced as KaaRMIYLow- †. Carmelo is used chiefly in the Hebrew, Italian, and Spanish languages, and its origin is Hebrew. It is derived from the elements 'karmel' meaning fruit garden, fruitful land ; 'carmen' song. Mount Carmel was an Israeli mountain mentioned in the Old Testament of the Bible and noted for its fruitfulness. The Crusaders built a monastery on the mountain dedicated to the Virgin Mary, hence the Spanish title, Virgin Mary Our Lady of Mount Carmel. The name Carmen (English, Romanian, and Spanish) is the female form of Carmelo.

Carmelo has 21 variants that are used in English and other languages. Variants used in English include Carmea, Carmee, Carmel, Carmelea, Carmelee, Carmeleigh, Carmeley, Carmeli, Carmelie, Carmello, Carmely, Carmey, Carmi, Carmie, Carmiel, Carmy, Karmel, and Karmello. The short form Carm, and the diminutive form Melo are other English variants. A variant of Carmelo in other languages is Carmine (Italian). 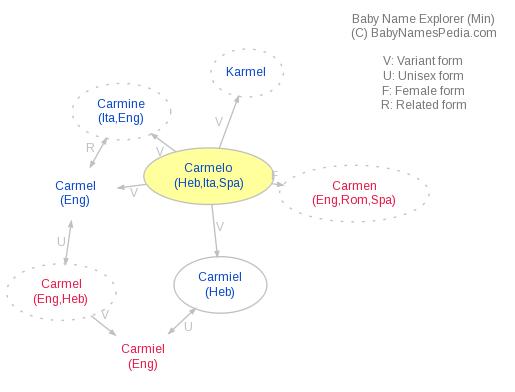