What does Carmen mean?

[ 2 syll. car-men, ca-rm-en ] The baby girl name Carmen is also used as a boy name, though it is far more popular for girls. It is pronounced in English as KAAR-MahN or in Spanish as KAAR-MehN †. Carmen has its origins in the Hebrew language. It is used largely in English, Romanian, and Spanish. It is literally from the words karmel which means 'fruit garden, fruitful land' ; carmen 'song'. The name is derived from the Spanish title, Virgin Mary Our Lady of Mount Carmel, which is from the place name of Mount Carmel in Israel. The '-l' in place name became '-n' in the first name, under influence from the Latin carmen, with which the name is often associated via folk etymology. In the 19th century, Georges Bizet's tragic romantic heroine in the highly popular French opera Carmen (1873-4), based on Prosper Mérimée's story Carmen (1845), contributed to the name's widespread use among English speakers. The Broadway musical Carmen Jones (1943), an update of Bizet's opera in an African-American setting, also fueled the name's popularity in the 20th century. Carmen is the feminine form of the Hebrew, Italian, and Spanish Carmelo.

Carmen is an all-time favorite. At present it is still rather popular as a baby girl name, but not to the degree it was in the past. The name increased in popularity from the 1900s up to the 1960s; prior to that, it was of only modest use. Its usage peaked in 1968 with 0.133% of baby girls being named Carmen. It had a ranking of #142 then. The baby name has experienced a drop in frequency since then. In 2018, it ranked at #433 with a usage of 0.039%, but it was nevertheless the most popular among all girl names in its family. Carmen was 52% more commonly used than the next ranked name, Mina, in 2018. Carmen has mainly been a baby girl name in the last century. There were 14 times more baby girls than boys who were named Carmen in 1981. 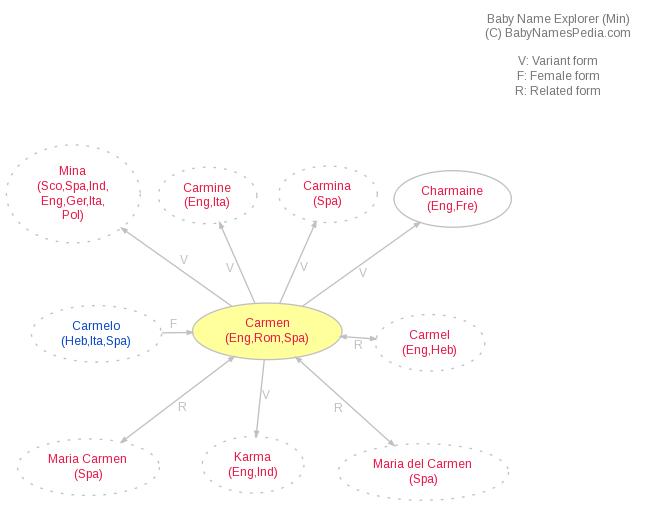