What does Carol mean?

[ 2 syll. ca-rol, car-ol ] The baby boy name Carol is also used as a girl name, with the latter form being much more common. It is pronounced as KEHR-ahL †. Carol is used predominantly in the Romanian language and its origin is Germanic.

Carol is a variant of the name Carl (English, German, and Scandinavian).

Carol is also a variant (Romanian) of the name Charles (English and French).

Forms of Carol include the variant spellings Carrol (Romanian) and Carroll (Romanian).

Carol is unusual as a baby name for boys. Its usage peaked in 1933 with 0.026% of baby boys being given the name Carol. Its ranking then was #328. The baby name has since substantially fallen in popularity, and is currently of very modest use. In 2018, among the group of boy names directly linked to Carol, Charles was the most commonly used. Carol has predominantly been a girl name in the past century. In 1965, Carol as a girl name outnumbered its use as a boy name by 184 times. 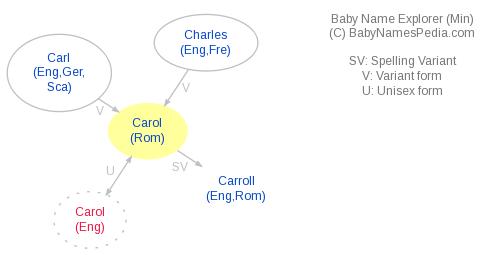