What does Carolina mean?

[ 4 syll. ca-ro-li-na, car-ol-ina ] The baby girl name Carolina is pronounced as KaeR-ah-LAYN-ah or KehR-ah-LAYN-ah in English or KaaR-ow-LIY-Naa in Italian and Spanish †. Carolina is a Dutch, English, Italian, Portuguese, Spanish, and German name of Germanic origin. This is the name of the American states North and South Carolina, which were named after King Charles I of England by his son Charles II.

Carolina is an English, German, Italian, Portuguese, and Spanish form of the English, French, and Scandinavian name Caroline.

Carolina is also a form of the English and French name Coralie.

Carolina has 11 forms that are used in English and other languages. English forms include Carilena, Carlena, Caroleena, Caroleina, Carolena, Carolinah, Caroline (used in French and Scandinavian too), Carolyna, Carrolena, and Karolyna. A form of Carolina used in other languages is the Slavic Karolina.

Variant forms inherit both the origin and meaning of the name Carolina.

Carolina is fairly popular as a baby name for girls. The name grew in popularity from the 1950s up to the 2000s. At the modest height of its usage in 2004, 0.063% of baby girls were named Carolina. It ranked at #254 then. The baby name has since experienced a decline in frequency. In 2018, its usage was 0.040% and its ranking #425. Within the group of girl names directly related to Carolina, Caroline was the most commonly used. In 2018, it was used 6 times more than Carolina. 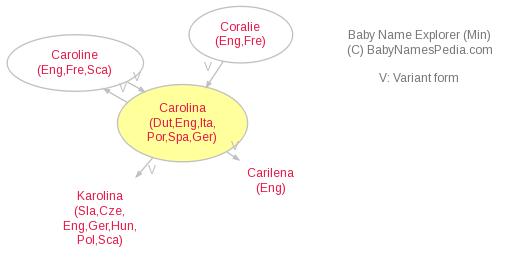