What does Caroline mean?

[ 3 syll. ca-ro-li-ne, car-ol-ine ] The baby girl name Caroline is pronounced in English as KAER-ah-LayN, KAER-ah-LihN, KEHR-ah-LayN or KEHR-ah-LihN, or in French as Kae-Row-LIYN †. Caroline's language of origin is Germanic. It is predominantly used in English, French, and Scandinavian. It is derived from the word karl with the meaning 'man, free man'. Carolina was the oldest feminine form of Charles; it developed from the Latin Carolinus, itself an elaboration of Carolus. The popularity of the name in the USA reflects a growing trend in using place or state names as baby names; North and South Carolina were themsleves named by King Charles II in honor of his father Charles I. The short form Carrie was promoted in the late 20th century by the Stephen King horror novel Carrie (1974), while the appearance of the fictional Carrie Bradshaw in the popular series Sex And the City (1998-2004) did not appear to increase its use as a name for babies.

Caroline is an English, French, and Scandinavian form of the Dutch, English, Italian, Portuguese, Spanish, and German Carolina.

Caroline is also a form of the English and French Coralie.

Caroline is the feminine equivalent of the English and French Charles.

What are the Variant Forms of Caroline?

Caroline is a popular baby girl name, and it is also perceived as rather trendy. The name grew in popularity from the 1950s up to the 2000s. Its usage peaked in 2000 with 0.252% of baby girls being named Caroline. It was #65 in rank then. The baby name has experienced a decline in frequency since then. In 2018, it ranked at #55 with a usage of 0.224%, but it was nevertheless the 2nd most popular after Charlotte, among all girl names in its family. The name was thrice as popular as Caroline in 2018. 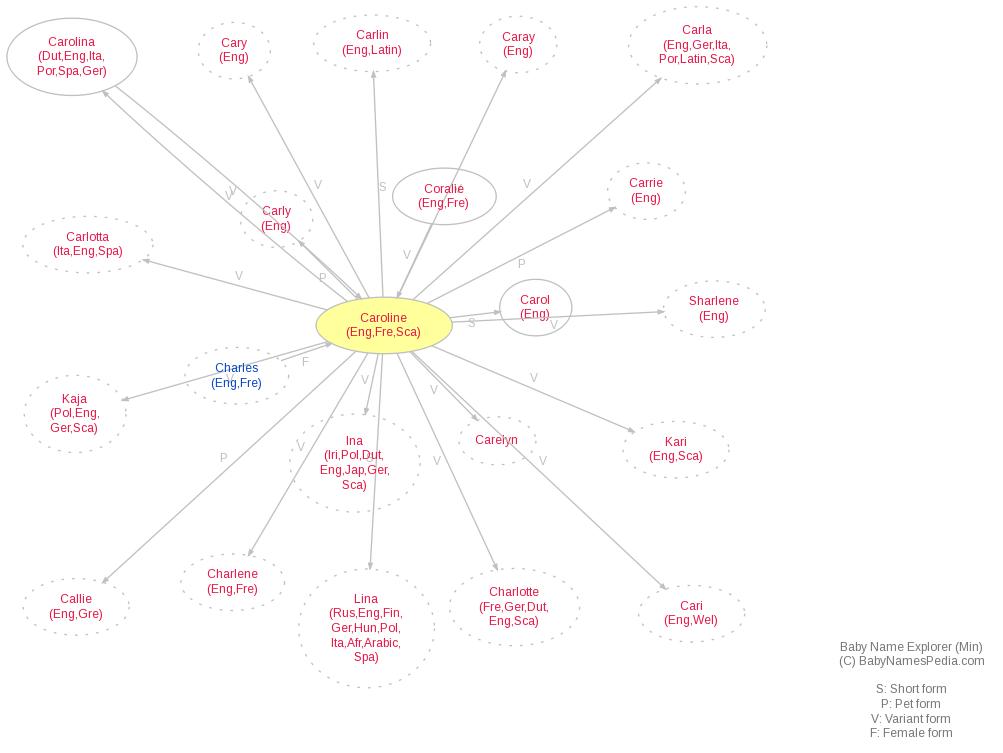