What does Cary mean?

[ 2 syll. ca-ry, car-y ] The baby boy name Cary is also used, but less often, as a girl name. It is pronounced as KAAR-iy- or KEHR-iy- †. Cary is an English name of Old Welsh, English, and Germanic origin. From English roots, its meaning is from the River Cary; from the pleasant stream. The first name is derived from the surname, which is itself taken from an English place name, the River Cary in Devon or Somerset. The river name could mean 'pleasant stream'. The name was first made famous by the American film star Cary Grant (1904-1986).

Cary is a variant (English) of the name Carey (English and Irish).

Cary is also a variant (English) of the name Charles (English and French).

Cary is unusual as a baby name for boys. Its usage peaked modestly in 1966 with 0.042% of baby boys being given the name Cary. It ranked at #264 then. The baby name has since fallen out of favor, and is currently of very light use. Among the group of boy names directly linked to Cary, Charles was the most regularly used in 2018. Cary has in the past century been mostly given to baby boys. In 1977, the name Cary was given to 58% more baby boys than girls. 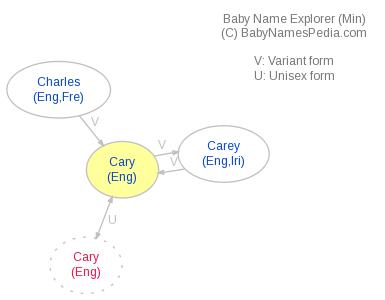