What does Casey mean?

[ 2 syll. ca-sey, cas-ey ] The baby boy name Casey is also used, but less commonly, as a girl name. Its pronunciation is KEY-Siy- †. Casey is used chiefly in the English language, and it is derived from Celtic and Slavonic origins. From Celtic roots, its meaning is descendant of Cathasaigh, descendant of the vigilant one. It is from the element 'cathasaigh' which means vigilant, wakeful. The first name is fom an Irish family name Ó Cathasaigh meaning 'descendant of Cathasaigh' or 'descendant of the vigilant one'. In the USA, it was originally bestowed in honor of the railroad engineer Casey Jones (1863-1900) who sacrificed himself to save many others and was thereafter immortalized in a popular ballad sung by his friend; Casey was his nickname from his birthplace Cayce, Kentucky. The first name could also be derived from the initials K.C., particularly in the UK.

In addition, Casey is a diminutive form of the name Casimir (English and German) in the English language.

What are the Variant Forms of Casey?

Casey is a classic favorite. At present it is still fairly popular as a baby name for boys, though it was in more widespread use before. The name's popularity jumped from the 1940s up to the 1980s. At the modest peak of its usage in 1988, 0.202% of baby boys were given the name Casey. It ranked at #83 then. The baby name has since experienced a fall in popularity. In 2018, its usage was only 0.024% and its ranking #583, but it was nonetheless the 3rd most popular after Kasen and Case, out of all boy names in its group. In 2018, Kasen was used 48% more than Casey. There were times from 1995 to 1998 when more girls than baby boys were named Casey, but currently it is more often than not a baby boy name. In 2017, the name Casey was given to 77% more baby boys than girls. 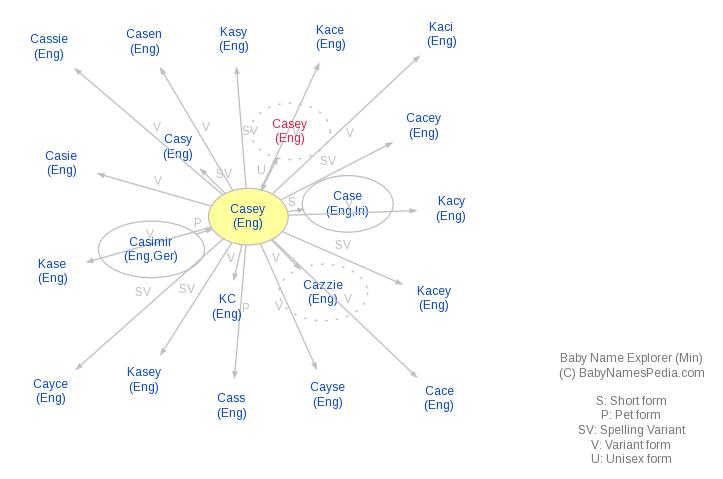