What does Casimir mean?

[ 3 syll. ca-si-mir, cas-im-ir ] The baby boy name Casimir is also used as a girl name, but it is much more common for boys. Its pronunciation is KAA-Ziy-Mih-R †. Casimir is used predominantly in the English and German languages, and it is derived from Slavonic origins. The name's meaning is declaration of peace, destroyer of peace. The name is derived from the Polish Kazimierz. The first element is the Slavic 'kazic', but the second element is not known for sure. The Old Slavonic word 'meri' (meaning great, famous) was often re-interpreted as the medieval word 'mir'. Consequently, the name was interpreted as 'declaration of peace'. However, the name could also have the opposite meaning 'destroyer of peace'.

It was traditionally borne by medieval Polish kings, including Casimir I who united Polish lands, and the revered Casimir III the Great, the only Polish king who both received and kept the title of 'Great'. The name was also borne by Saint Casimir (1458-1484), son of King Casimir IV and patron saint of Poland and Lithuania. It was first introduced to English speakers in Europe via Germany where it was borne by members of royalty. The Polish form was commonly used by supporters of Polish independence in the 19th century, and subsequently brought to the USA by Polish immigrants. The name Casimira (Spanish) is the female version of Casimir.

Casimir is a widely used name; it has 32 variants that are used in English and other languages. Variants used in English include Cas, Cashmere, Casimear, Casimeer, Casimeir, Casimer, Casimere, Casimier, Casimire, Casimyr, Casmir, Casmire, Cass, Castimer, and Cazimir. The contractions Case and Cash, and the diminutive form Casey are other English variants.

Casimir is rare as a baby name for boys. At the modest peak of its usage in 1919, 0.022% of baby boys were given the name Casimir. It ranked at #397 then. The baby name has since fallen out of favor, and is currently of irregular use. Out of the group of boy names directly linked to Casimir, Cash was the most frequently used in 2018. Casimir has in the past century been mostly given to baby boys. 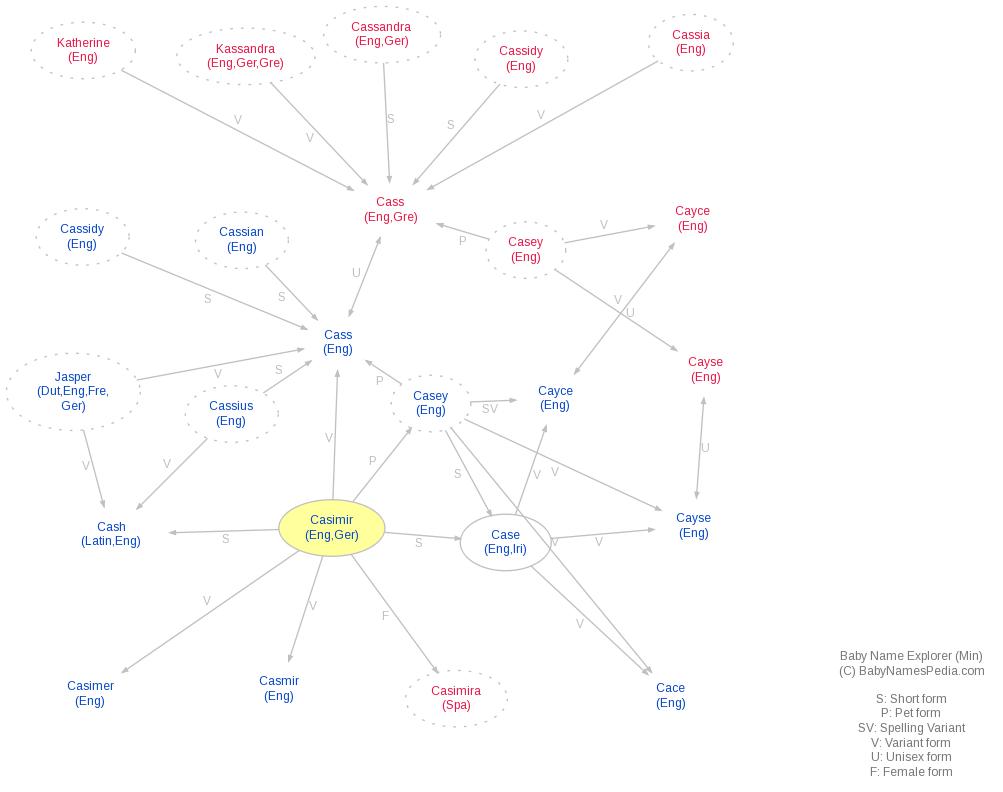